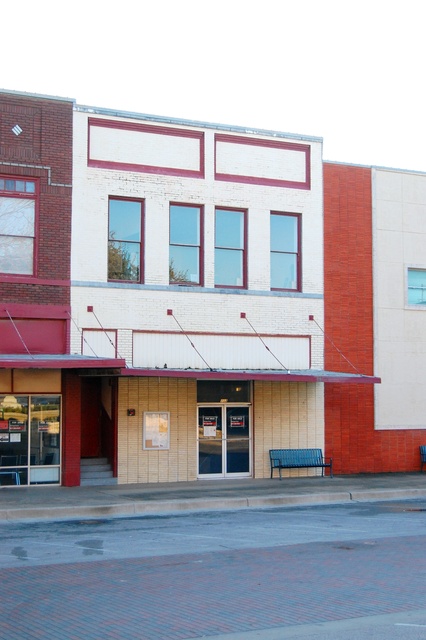 The Empire Theatre was opened in 1907, and closed January 13, 1951. It was operated by Robb & Rowley-United Inc. The structure still stands today but is no longer used as a theatre.

The Empire Theater opened in April of 1907 by the Empire Amusement Co. at 115 West Franklin on the south side of the square. It’s remodeled in 1908 and later it’s in the hands of the Waxahachie Amusement Company which also was the operator of the Dixie. In 1927, Robb & Rowley Theatre Circuit takes on the Empire and the Dixie. Whether in the silent age or the sound era, the Dixie is the “A” theater with the Empire the “B” house. Sound pictures are finally added to the Empire on September 12, 1930.

In the 1940s, the theater is generally open just two days a week on Friday and Saturday and toward the very end appears to close down in the summer months bowing to the Ellis Drive-In. The Empire appears to cease operations as a regular movie house following the double-feature on January 13, 1951 of “The Kid Rides Again” and “Let Down Your Aerial.” In 1954, Waxahachie Bank & Trust is remodeling the theater for an expansion project when vandals set back construction work. Infrequent meetings still take place in the auditorium at least through 1959, however.