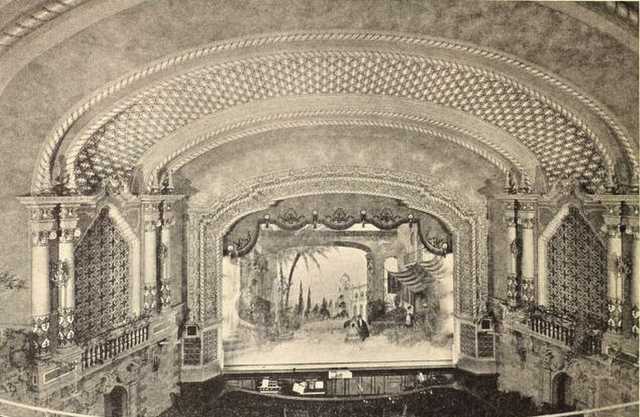 The Orpheum Theatre in Wichita, Kansas represents one of the finest remaining examples of Atmospheric school of theatre architecture which was developed during the first part of the 1900’s. Although the theatre is under restoration it remains open and hosts a variety of events such as stage shows, movies, comedy shows and concerts.

The architect for the Orpheum Theatre, John Eberson, was the creator of the Atmospheric school. In his book, “The Picture Palace”, Dennis Sharp has classified the Orpheum’s style as “pre-Atmospheric”. However, further research indicates that the Wichita structure is in fact an authentic Atmospheric style with all the accoutrements associated with the style. Opening on September 4, 1922 with vaudeville, and the movie “The Three-Must-Get-Theres” starring Max Linder, it was the first Atmospheric style theatre in the United States. The Majestic Theatre in Houston, Texas was the second. The original seating capacity was for 1,700.

The Orpheum Theatre was originally conceived by a group of local investors and when construction completed it was leased to Carl Hobitzelle, the operator of a $6,000,000.00 theatre chain. The initial construction cost of the theatre was $750,000.00. Opening on Labor Day, September 4, 1922 with 5-acts of vaudeville on stage and the movie “Three-Must-Get-There’s” starring Max Linder. It was an integral part of the famous “Orpheum Circuit” and in its heyday virtually every major star of vaudeville graced its stage, including such luminaries as Houdini, Eddie Cantor and Fannie Brice. During its vaudeville period, more than 17,000 acts appeared with the playbill changing three times each week. On the stage in the fly-out hangs the theatre’s original fire curtain. It is a hand executed painting on asbestos, designed specifically for the Orpheum Theatre by John Eberson and rendered by Fabric Studio of Chicago. This curtain is quite valuable in its own right. The Orpheum Theatre was equipped with a Kilgen theatre pipe organ. On May 20, 1929 it was equipped for ‘talkies and the first sound films to be screened were Mary Pickford in “Coquette” & Kenneth Harlan in “The Alibi”.

The Orpheum Theatre has significant associations nationally and internationally with the development of a whole new concept and style of theatre architecture. The Orpheum Theatre was closed as a movie theatre on November 17, 1976, with a martial arts movie “The Bodyguard”. Most of the fittings and fixtures (including the seats) were then removed from the building.

In 1980 the Orpheum Theatre was placed on the National Register of Historic Places. In 1984 it was gifted to the Orpheum Performing Arts Centre, Ltd., a non-profit corporation which is dedicated to the preservation, restoration and ongoing utilization of this important part of our cultural and architectural heritage.

To the greatest extent possible, it has been the intent of the Orpheum Performing Arts Centre, Ltd. to restore this beautiful theatre to the design that John Eberson initially conceived and constructed.

Good Theatre stories from Employees.Thanks for putting them on so many stories yet to be told,all so different in many ways.

After doing more research the architect for the Orpheum was John Eberson. Harry Weaver was the architect who supervised the construction in Wichita.

Where is the WESTWAY CINEMA, VICTORY DRIVE-in and VOGUE ART.?

Mike, The Voque Art Theater was originally the Marple Theater at 417 E. Douglas.

The Westway Cinema was at 2515 S. Seneca in the Westway Shopping Center.

Are you sure you don’t mean the Victory Theater. I can not find any information on a Victory Drive-In in Wichita.

Looks like they are about to ruin the place with a remodel, gone will be the nice neon marquee front.

Terrywade, The original entrance with the neon marquee is not going away according to the article below. http://www.kansas.com/2013/12/06/3164040/orpheum-theatres-30-million-campaign.html

If you look at the photo provided you will see the back of the neon marquee to the right of the building.

According to their video on their website, the restoration is mostly finished now; I believe the bulk was finished by 2011.

The restoration is far from finished. The auditorium still needs a lot of work.