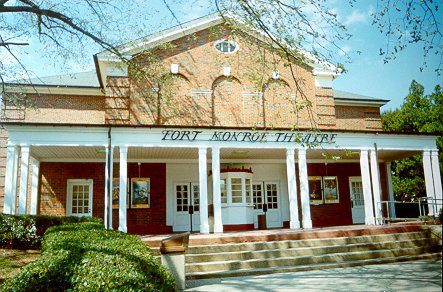 Located in the historic Fort Monroe, in Hampton, VA. The Fort Monroe Theatre was operating prior to 1941.

The theatre is still standing today, but is not used. Fort Monroe was closed in 2011, and is now a tourist attraction.

The address of the Fort Monroe Theatre is 42 Tidball Road. The theater has been used for some of the public meetings of the Fort Monroe Authority, the public agency charged with overseeing the conversion of the facility to civilian use. As recently as March 15, the theater was also the venue for a Town Hall meeting held by local Congressional Representative Scott Rigell.

One proposal for the part of the fort that includes the theater is that it be used as a public residential high school. This article from dailypress.com discusses the proposal. Under this plan, the theater might be used as a performance space and lecture hall.

Here is a photo of the Fort Monroe Theatre.

I serviced the Ft. Monroe Theatre along with Langley AFB and Ft. Eustis for a few years prior to its decommissioning. The booth was a typical AAFES equipped booth but was mono sound only. All of these theatres were 2 projector change over, 20 minute reels. Enjoyed servicing them.