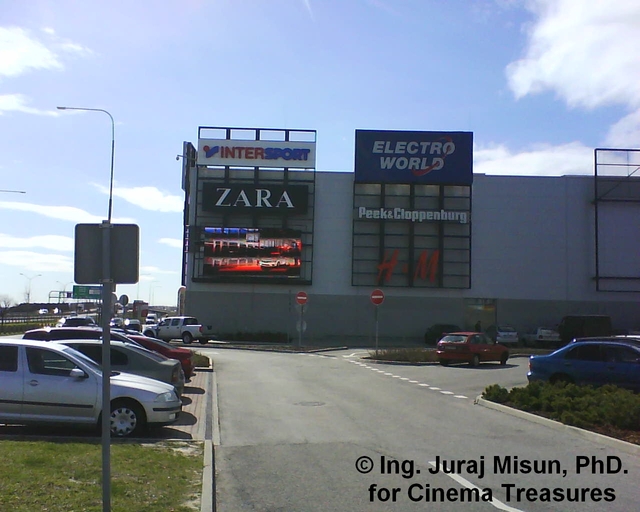 The second IMAX Theater in the former communist countries of Central and Eastern Europe – in Bratislava, Slovakia – opened on 31st October, 2002. The first one was built in Warsaw, Poland. The Prague IMAX Theater (in Flora Palace) opened about six months later. Slovakia was the 32nd country using the IMAX technology.

Orange IMAX was located in a new shopping center Avion, built by the Swedish furniture company IKEA, near to the Bratislava International Airport. It had to be the main attraction of the largest shopping center in Slovakia. The second attraction was an ice-skating area.

Two domestic movie distributors – Tatrafilm and Attack - established a joint venture (Metropolis) that purchased a 30-year license for IMAX. The company invested a total of 3 million dollar and counted the return on investment at the number of one million visitors. They had bold plans and with an annual attendance of 450,000 spectators they wanted to open a second IMAX in the second largest Slovak city of Kosice. As a long-term general partner of the theater Metropolis gained the mobile operator Orange, a subsidiary of Telecom France.

The site had a maximum capacity of 345 seats for 2D-showings and 305 seats for 3D-films. The first screened movie was “T-Rex: Back to the Cretaceous”. It used the IMAX 3D SR technology and a six-channel digital surround sound SONIC with 24,000 watts of power. The ticket prices were about 10 percent higher than for a ticket to the multiplex cinema. According to the company executive it was the lowest IMAX-ticket-price in the world.

After about one and a half year of operation, IMAX Bratislava started to have problems with its profitability. The interest of visitors began to decline due to the lack of films. The first signal the cinema did not earn enough came in mid-2004, when the general partner Orange started to offer a 30-percent discount to its customers every Wednesday and the total prices were slightly reduced. Paradoxically, ticket prices in multiplexes have grown in the same period.

Orange IMAX closed down on 2nd May, 2006. The main reasons for its closure were according to the experts a small number of movies and the expensive technology. The six-floor high IMAX building was demolished during the third extension of the Avion shopping park in 2008 to make space for a shop with electronics.

The closure of IMAX Bratislava came just half a year after the closure of the same project in Vienna (16th November, 2005). IMAX returned to Austria in cooperation with the company Cineplexx as part of several multiplex cinemas. In Slovakia, there were plans to integrate an IMAX Theater into the Eurovea project, but Palace Cinemas ultimately opted for a common cinema screen.