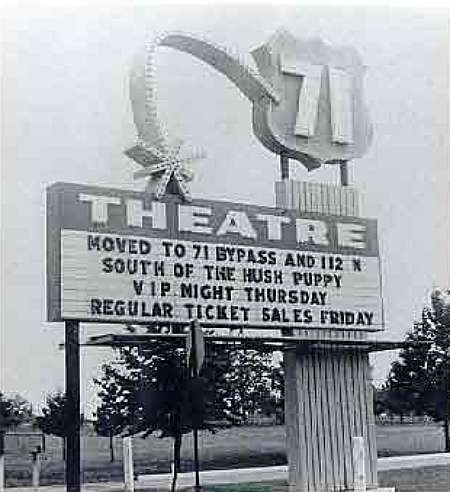 Operated for decades at the intersection of Rolling Hills Drive and U.S. Highway 71-B in Springdale to the north of Fayetteville, Arkansas. The 71 Drive-In was opened on August 18, 1949 with Glenn Ford in “The Man From Colorado”. It was operated by Commonwealth Theatres Ct. out of Kansas City. It was closed in the late-1980’s.

The theater was sold and demolished and converted to a large strip retail center named Fiesta Square, anchored by Walmart. The AMC chain operates the Fiesta Square 16-screen indoor theater, a somewhat run-down and neglected property, with a mix of first-run and second-run films (it has its own page on Cinema Treasures).

The July 4, 1960 issue of Boxoffice included a two-page spread on the 71, focusing on its playground, mainly its miniature train ride, complete with tunnel and trestles, that carried children to a miraculous lollipop tree that produced its “fruit” three times a week.

The 71 Was Still In Operation Since 1971 According To The Northwest Arkansas Times.

The 71 opened one mile north of Fayetteville on Thursday, Aug. 18, 1949, based on its grand opening ad the day before in the Northwest Arkansas Times. The first show was a Glenn Ford film, “The Man From Colorado,” plus two cartoons, “Two Gophers from Texas” and “Nothing But the Truth.”

The front-page story of the opening said that several Commonwealth Theaters officials would attend to witness their first drive-in in the state.

I am so confused. Topo maps show that the 71 Drive-In about one mile north of Fayetteville, but they also show a drive-in about three miles north of Springdale. That matches a front-page report in the Feb. 25, 1949 edition of the Northwest Arkansas Times, which said that a drive-in three miles north of Springdale was to built by a corporation headed by Bob Fellers of Neosho MO. A 1980 aerial photo showed a drive-in still intact at about 4876 N Thompson St. By 1994, the screen was still up, but the site was being used to park trucks.

Update: That northern drive-in became the Grove, whose location CT erroneously maps south of Springdale as I type. Its CT profile says that (also?) opened as the 71 and was later renamed.

The 71 Drive-In Opened On August 18th, 1949 With Glenn Ford And William Holden In “The Man From Colorado” Along With 2 Looney Tunes Cartoons “Two Gophers From Texas” (Goofy Gophers) And “Nothing But The Tooth” (Porky Pig).