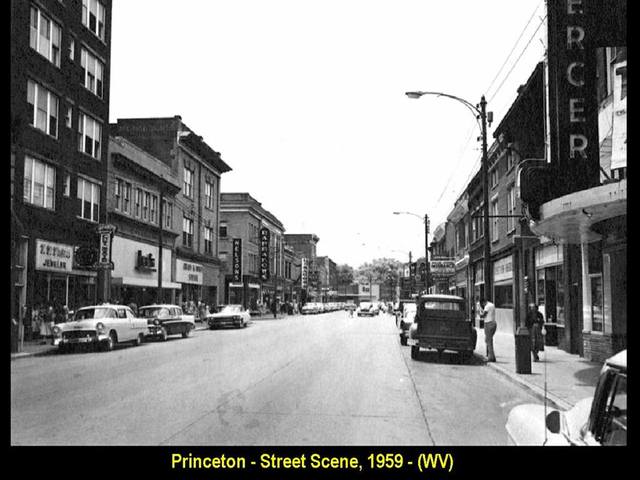 Opened as the Royal Theatre in 1911. It was renamed Lavon Theatre in 1954 and was closed in 1983 and became a church. In 2022 it was being renovated and will reopened as the Princeton Renaissance Theatre screening movies and presenting live shows.

I’m pretty sure that I saw Blazing Saddles at the old Mercer Theater in 1974.

Just added a 1958 photo courtesy of the real cars from the 40’s 50’s and 60’s Facebook page. It appears to have the name Lavon above the marquee.

It’s sad that they don’t mention Rev Leonard Repass’s tv studio. Leonard was the one who arranged for the theatre to be sold to Fred Furches who was the owner of Jesus victory crusades and who started the soup kitchen. Leonard Repass was also the pastor of the upper room church.. I am in no fussing they it wasn’t mention. Just sad to my heart…

The ongoing (since 2013) renovation of the Lavon Theatre has led to several articles about it in the press. This one from the February 11, 2017 issue of The State Journal says that the Royal Theatre opened in 1911 and operated under that name until 1954. At that time it was bought by Dr. Lawrence Von Court, who had his office in one of the storefronts flanking the theater entrance, and he renamed it the Lavon Theatre.

The Princeton Renaissance Project, the outfit renovating the house, apparently intends to keep the name Lavon, although the rebuilt marquee features three capital R’s on it, presumably a nod to the origin of the house as the Royal.

Links to several other articles about the theater, along with many photos of it, both vintage and modern, can be seen on this Facebook page titled “Celebrating and Reviving the Lavon Theater, Princeton West Virginia.”

The Royal Theatre was listed in the 1912-1913 Cahn guide, though without any details. The Royal was mentioned in the June 24, 1916 issue of Motography.

Still In Operation Into The 1970s, Along With The Mercer.

It closed in 1983. Currently under Restoration and the new name will be Princeton Renaissance Theater. Official website and Facebook page below.