Located in the Wichita Mall, the Mall Cinema was a one screen movie house which opened March 25, 1970 with Gregory Peck in “Marooned”. It was Mann Theatres operation. Showing May 15, 1974 was “The Sting”. Dickinson Theatres added a further 3-screens inside the mall.

This was THE Star Wars theater in the 80’s. The original played there for over a year. I saw the 3rd showing of the Empire Strikes Back there on May 21 1980. I was there for the first midnight showing of Return of the Jedi in 1983. I do not remember an expansion of the theater itself, though it is possible the original (I think) 800 seat theater may have been divided. That was the trend at the time toward shoebox theaters. When this Malls anchor (Montgomery Wards) closed in 2000, the mall essentially died and has since been refaced. There is no trace of this theater anymore. 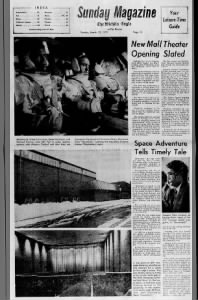 The 804-seat Mall Cinema was designed by MBA Engineers Inc. of St. Louis.

The Mall Cinema Wichita, Kansas and the Century 21 (Single screen) Springfield Missouri were identical in design. Just one auditorium faced east while the other faced west. Both built by National General and later Mann ultimately by Dickinson.

If one knows what they are looking for the street sign is still there. (I changed it on more than one occasion.)