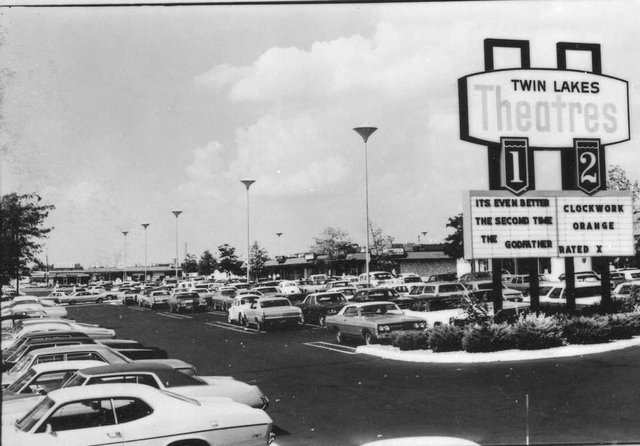 The Twin Lakes Theatres 1 & 2 was a twin theatre in Wichita which opened June 12, 1968 with Jack Lemmon in “The Odd Couple” playing on both screens. It was a Commonwealth Theatre. Taken over by United Artists in 1988, in November 1990 it was taken over by Crown Cinema Corporation.

It was closed on January 21, 1993 with Eddie Murphy in “The Distinguished Gentleman” & Richard Prior in “The Toy”.

Twin Lakes is where I saw “Lawrence of Arabia” in 70mm when it was re-released in 1989 I believe. At the time, I believe it was the only theatre in Wichita that had the capability of showing a 70mm print. The other memory of Twin Lakes I have is that one of the “twins” had a huge window where you could look at the lake outside. It had a curtain that was drawn before the movie started of course.

-Cinemeccanica projectors (both 70mm capable) and six-track stereo systems in both auditoriums.

-Single box office for both theaters capable of handling either regular or reserved seating.

The Wichita-Sedgwick County Historical Museum has a thread of memories about the Twin Lakes Theaters. 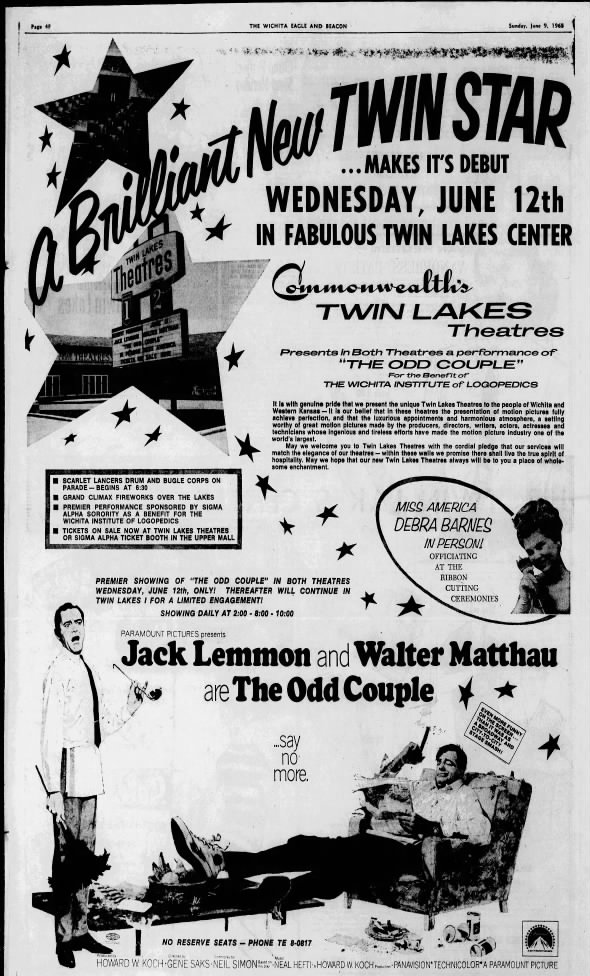 Commonwealth made news by opening Wichita’s first hardtop theater since 1952 and did so with the city’s first twin-screen indoor venue. Opening as the Twin Lakes Theaters 1 & 2, Commonwealth featured “The Odd Couple” on June 12, 1968 with Miss America Debra Barnes in attendance.

In 1988, United Artists acquired Commonwealth. But in the multiplex era, UA was trying to rid itself of aging singles, doubles, and triples. It dropped the venue on October 24, 1990. Richard Durwood’s Crown Cinema Corporation took on the venue the next month as the Twin Lakes Cinema. Crown and Durwood closed it as the Twin Lakes Cinema with Eddie Murphy in “The Distinguished Gentleman” and Richard Pryor in “The Toy” on January 21, 1993 citing low attendance and reaching the end of its 25-year lease.

I was a doorman at Twin Lakes Theatres from 1981-1983. It was a fun job - even with the orange Commonwealth uniforms! The number 2 theatre was smaller (350 seats) but had a lake view with a long curtain that closed when the lights dimmed. The number 1 theatre was much larger (600+ seats) and had an amazing sound system. We played Stripes, ET, Evil Under the Sun, Reds, Tootsie, and On Golden Pond while I was there. We also did a special showing of Ben Hur - very cool to see it on the big screen. Good times!