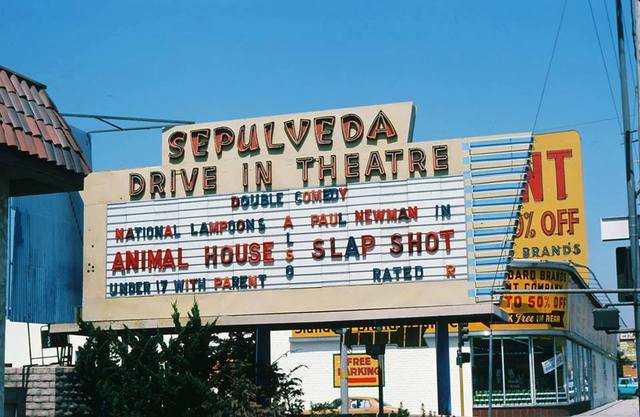 The Sepulveda Drive-In opened May 25, 1955 with Richard Todd in “A Man Called Peter” & Sterling Hayden in “The Eternal Sea”. It was built & operated by Aladdin Enterprises. It was closed August 13, 1989. It has since been demolished.

Yeah, she is a school teacher,doesn’t need headaches from us.

the drive in was seen in the television series Knight Rider-season 3,episode 5(halloween knight),chasing the bad guy into the drive in near the of the episode.

For those with Netflix the Sepulveda is (quickly) visible during the introductory ‘bus ride’ in the newly-released Orson Welles film THE OTHER SIDE OF THE WIND. (A different portion of the film was reportedly photographed inside of the nearby Reseda Drive-In.)

Chips episode titled “Green Thumb Burglars” has them chasing a truck through the field of the drive-in theater. This is the episode where the guys pull over H.R Pufnstuf (in costume).

The site is now a gym(LA Fitness).

The drive-in was also seen in the tv series “Chips”(season 1, epidode 6 – Baby food), briefly showing the screen over the fence from the motor home that Ponch was staying in next door to the drive-in. The motor home has been demolished and is now a self-storage facitly.

Featured in the 1974 movie Bank Shot.