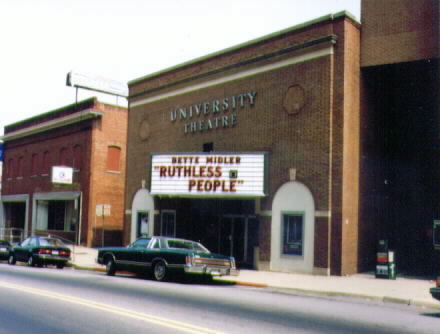 Located in the campus district of the University of Virginia. The University Theatre was opened in 1938, and by 1941 it was operated by Paramount Pictures Inc. through their subsidiary Hunter Perry.

The University Theatre was still open in 1986.

Located in the area around UVA know as “The Corner.”

Following its demolition in the early 1990s, the location was home to regional record store chain Plan 9 Music. Following the departure of Plan 9, the site housed a tanning salon and, currently, a convenience store.

On a personal note, I saw Return of the Jedi here several times (either in 1983 or in re-release) and my first James Bond film (License to Kill)in 1989.

I also worked at Plan 9 for a number of years.

Built in ‘38, Opened August 11th at 7pm. First movie: Crime Without Passion (1934). Closed: 1990. Longest running movie: ET, 17 weeks, beating out The Sound of Music by a week. March 28, 1961, 3-day picketing for civil rights by UVA students (I won’t even reprint what the sub-headline was that ran) [showing at that time: On The Beach, Gregory Peck and Ava Gardner]. Theatre finally desegregated when Federally compelled in '64.

Though not yet named, the University Theatre was probably the project that was listed as being under construction in the April 9, 1938 issue of The Film Daily:

Pruitt & Brown was a firm based in New York City, but with branch offices in Virginia and in Oklahoma.

1959 nighttime photo with full marquee in this link.

The projection booth photo is definitely NOT the University. The theatre operated with Peerless Magnarc carbon arc lamps until the day it closed.

Will have to take your word for it. Billy Smith loaned me the picture he framed for scanning and told me the verbage I put in the caption. Too bad he passed couple months ago, or I would prod his memories again. I do remember seeing a Peerless with Century head in the window of Cinema Taco on the Mall a few years ago. Was told that one was from the Jefferson.