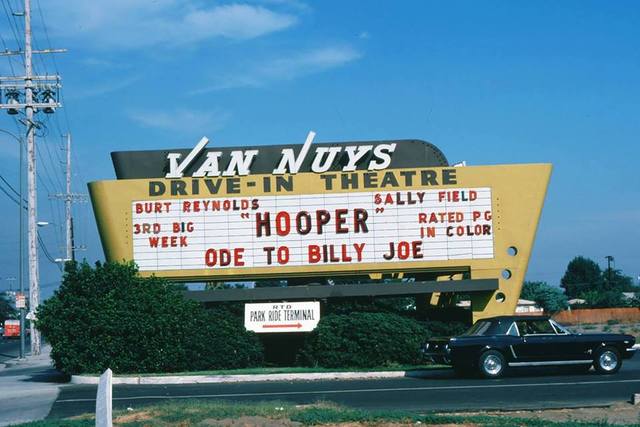 During its last year, it was the last drive-In located in the valley area of Los Angeles. As Pacific Theatres closed the theater on September 2, 1996, its marquee said “closed for the season”. That next season never came.

The Van Nuys Drive-In sat empty for a few years and was being used to store cars from a nearby dealership. It was demolished in the late-1990’s.

As of October 2002, the Vineland Drive-In, Pacific’s last drive-in theater, is the closest ozoner to the valley and Los Angeles proper following the closures of the Azusa Drive-In and 101 Drive-In.

Same photo is located on the Cinema Retro Blog.

Featured in “Once upon a time in Hollywood” must be a computer model.

Opened with “Buffalo Bill” and “Wings of the morning”.

The school that was built on the site, Vista Middle School appears to have a tribute to the drive-in with its logo of a cowboy on a horse.

Vintage Los Angeles Facebook link with photos of the miniature replica built for “Once Upon A Time In Hollywood”. Click through for 4 photos total.