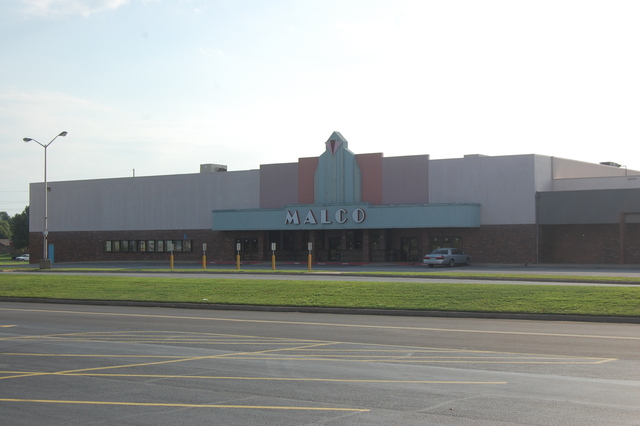 This was originally a twin. In the photo contributed by Norman, on the right where the roof line dips down and it looks like a storefront, those are the original screens (now numbered 8 and 9). Those auditoriums are long and narrow, with floors that slope down from the rear and then slope back up to the screen. Virtually identical to the Malco Twin that was in the Fayetteville Mall.

The other 7 screens were added in the early to mid 90’s as near as I can tell, with a central concession stand accessible from both sides. Screens 1 and 2 are the largest and appear identical, seating around 250 by a quick and dirty count. Screen 1 still displays a THX certification plaque. Screen 3 is not in use, with a large trash can placed in the doorway and a padlocked door. Screens 4-7 are along the back hallway behind the concession store room. There are lockable doors in the hallway, that are sometimes used to control access to rated R movies.

This was one of the last 35mm theatres in Northwest Arkansas and I had wondered if it was going to convert or close. I saw a film here yesterday and all 8 screens that are in use have been converted to digital projection. There were also Klipsch crates tucked against the wall in the hallway, so they might be upgrading sound systems as well. My film certainly sounded punchier than I remember from this cinema. I spoke with the ticket taker and he said the conversion happened in early May, and that they had painted the building exterior at the same time. Nice to see Malco maintaining their property. This is now my go-to place for seeing a film. All shows all times are $3. You don’t have to worry about potentially beat up prints, and it has the sloped floor style I grew up with, rather than the currently popular stadium seating.