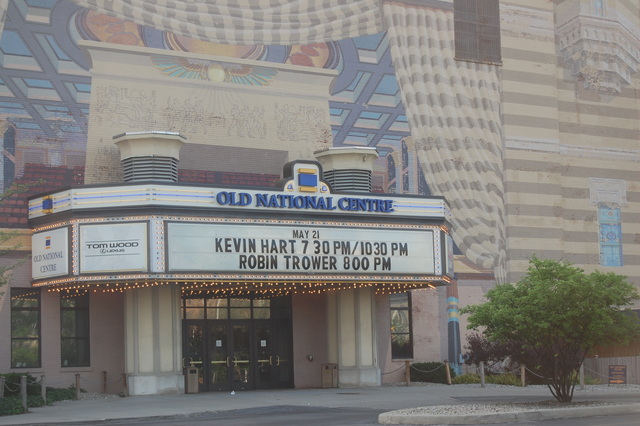 The Murat Theater was opened February 28, 1910 when it was leased to the Shubert Brothers who operated it into the 1930’s. Movies were often programed at the theatre. Sometimes known as the Murat Temple, it was built for the Ancient Arabic Order, Nobles of the Mystic Shrine. There are 1,155 seats in the orchestra, 642 seats in the balcony and a series of boxes seat 156. The proscenium is 40 feet wide, the stage 40 feet deep.

In the mid-1930’s it became home of the Indianapolis Symphony Orchestra. It was the home of roadshow presentations in the 1950’s in Indianapolis. Today, it is a premier live venue.

The Murat Theatre was opened on February 28, 1910. The building was designed by Indianapolis architect Oscar D. Bohlen of the firm D. A. Bohlen & Son. It is predominantly Moorish-Oriental in style, and originally had 1,950 seats. A major renovation undertaken in 1996 increased the seating capacity to 2,476.

In its early years, the Murat Theatre was leased by the Shubert organization, and it later served as the venue for the Indianapolis Symphony Orchestra. From the late 1940s until the early 1960s, it was the only house in Indianapolis capable of hosting the touring companies of major Broadway stage productions.

The building is still owned by the Shriners, but the Murat Theatre is now operated under a long-term lease by Live Nation, which lists upcoming events on this web page.