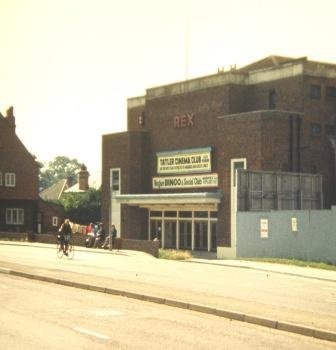 Located in the the town centre of Farnborough, Hampshire. The Rex Cinema was built by the County Cinemas chain and opened on 25th September 1937 with Jessie Matthews in “Gangway”. Jessie Matthews and her film star husband Sony Hale appeared ‘in person’. Seating was provided for 828 in the stalls and 390 in the circle.

In September 1939, County Cinemas were taken over by the Oscar Deutsch chain of Odeon Theatres Ltd., but the Rex Cinema was never re-named Odeon.

It was sold to the Classic Cinemas chain on 3rd December 1967, again retaining its ‘Rex’ name. The Rex Cinema operated as a mainstream cinema, but became a part-time bingo club on certain nights of the week, and on Wednesdays it operated as a Tatler Cinema Club screening uncensored sex films. By 1972, the Rex Cinema was screening films in the afternoons, and was on bingo every evening a the Vogue Bingo Club. By 1973, bingo had taken over completely, although the Saturday morning children’s film show continued.

It was closed in the mid-1970’s, and was demolished. The Kingsmead Shopping Centre and Kingsmead House now stands on the site.

New picture of the Rex prior to demolition

Photo of the foyer uploaded