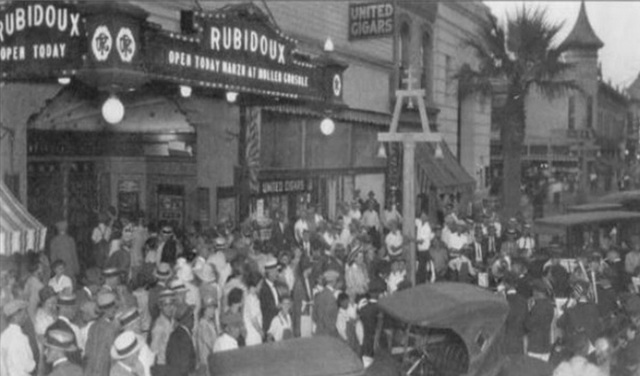 The Rubidoux Theatre can be traced back to as early as 1913 in the Riverside city directory when it was listed as the Grand Theatre at 827 Main Street. By 1924 the directory listed it as the New Rubidoux Egyptian Theatre. In the 1930 directory, due to a street numbering change, it was listed at 3827 Main.

According to information found at the Riverside public library the Rubidoux Theatre was Roy Hunt’s second theater in the city, the other theater being the Regent Theatre, which was located across the street. Hunt is noted for partnering with West Coast Theatres for the construction of the Fox Theatre, which opened in 1929.

The Rubidoux Theatre, said to be the first Riverside theater equipped for sound, was listed in the Film Daily Yearbook of 1934-35 with 420 seats and operated by Fox. The Rubidoux Theatre closed in 1938 when Hunt opened the De Anza Theatre.

Today the site is occupied by an office building.

Thanks for picture Ron.