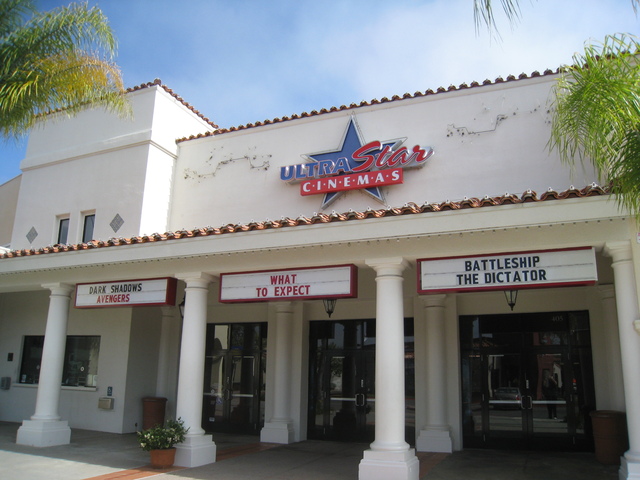 Only theater in Bonsall, along Highway 76. It was opened by CinemaCal Theatres on December 21, 1990. Opened as the Nickelodeon Galaxy 6 in December 1998. It was taken over by Digiplex Destinations in December 2012. In 2014 it was operated by Carmike Cinemas. In late-2016 it was taken over by AMC. It was closed on March 16, 2020 due to the Covid-19 pandemic. It was announced on September 20, 2020 that the closure would be permanent.

It was reopened by D'Place Entertainment in March or April 2021.

An article that mentions the theater when it was taken over by Ultrastar.

With AMC Entertainment’s announcement last week that the company planned to shut down nearly half of its movie theaters over the next three years, every major theater owner on the West Coast has now announced that it will shut down theaters in a major restructuring plan.

And most of the theaters being closed down or sold off by giant movie chains like Edwards, United Artists, and AMC are smaller neighborhood theaters with four to eight screens.

North San Diego County and Southwest Riverside County are no exceptions to this trend: Four theaters with 30 screens have been shut down and an additional five theaters with 34 screens once owned by big chains have been sold to a local movie theater company called Ultrastar.

The latest pickup for Ultrastar was the former Cinema Star Galaxy 6 in Bonsall, which Ultrastar took over on Friday.

Edwards, United Artists, General Cinemas and Cineplex (the owner of Loews theaters) have all declared bankruptcy and announced closings. Regal Cinemas has said that it plans to sell off some unprofitable theaters. Area theaters shut down in 2000 included Edwards San Marcos 6 in San Marcos, Edwards Carousel 6 in Escondido, Edwards Rancho California 10 in Temecula and the Mann Theater 8 in Oceanside. The area’s only discount movie house, the Silver Cinemas 7 in Rancho Bernardo, also shut down last year.

Most all of these theaters fell victim to bigger “multiplex” theaters that opened nearby, with stadium seating and sophisticated sound systems. And in a case of apparent corporate cannibalism, the Edwards San Marcos 6 and the Edwards Rancho California 10 both shut down due in part to competition from new Edwards multiplexes located just a few miles away.

Edwards officials said that they are not necessarily planning to shut down all of their smaller movie houses; rather, they care only about profitability.

“The plan was never to only have large megaplexes. The plan is to make sure successful theaters keep running,” said Edwards spokeswoman Anita Marie Hill.

Hill said the problem with many locations is that they are locked into expensive building leases which make it difficult for those theaters to turn a profit at prevailing ticket prices even though those locations might have a good customer base. By declaring bankruptcy, movie companies can get out of such long-term leases.

Hill said that Edwards' decision to open up megaplexes near smaller theaters was not a mistake.

“Throughout the industry, what customers are demanding is stadium seating and more sophisticated sound systems,” said Hill. “And many times, it is more cost effective to build a new theater than to renovate an existing theater.”

The rash of closings has two main effects: (1) residents in some neighborhoods now must travel a few miles extra to see a movie, and (2) some shopping malls are now left with a big, empty movie theater — space that is not easy to convert to other purposes.

The building that housed the former Edwards location on Nordahl and Center Drive near the 78 is still empty. But the movie theater closing does not seem to have affected businesses such as Dalton’s Roadhouse restaurant, which serves steaks, seafood, and barbecue in the same shopping center. The Edwards Cinema shut down in May.

“Our business is up quite a bit over last year,” said Dalton’s owner Marty Ewart. “That theater was not doing much business the year before it shut down.”

Ultrastar’s president, Alan Grossberg, said that there is no real crisis in the movie theater industry. Grossberg said that total movie receipts for San Diego County totaled $7.6 billion in 2000, a record year.

“The problem is not that people aren’t going to the movies. The problem is that the big boys expanded too quickly,” said Grossberg.

A lot of profitability

Grossberg said that the theaters that he bought from Edwards were all profitable by his calculations.

“The theaters that we took over were all profitable. We could have taken over another 30 (Edwards) screens which weren’t profitable,” Grossberg said. “The direction they are going in is towards large, mega-theaters with 14 to 20 screens and stadium seating.”

Grossberg is betting that there is still a place for smaller, neighborhood theaters.

“There is no reason for people to travel 8 to 10 miles when they can see a movie in their own back yard in a comfortable setting.”

The only United Artist theater in North County, located in Del Norte Plaza in Escondido, was taken over last year by the mall’s property management company, Pacific West Management, in order to keep the theater open. But Pacific West has since decided to convert the theater into a health club, potentially taking away Escondido’s last movie house.

AMC said that it would shut down 80 of its 181 theaters nationwide, most following the expiration of their leases. The closings represent 548 of the company’s 2,774 screens — about 20 percent — meaning that smaller theaters are being targeted. AMC has one theater in North County, the Wiegand Plaza 8 in Encinitas. AMC officials did not disclose their plans for specific movie theaters.

The recent problems faced by movie companies are common to companies in a variety of industries. They took on a great deal of debt, expanded rapidly, and ran into cash flow problems when sales were not high enough to service their debt. Companies adopting such a strategy either win big or lose big. And the movie companies have lost big, and savvy businessmen, such as Alan Grossberg, are now picking up bargains.

This theatre and all of Digiplex’s locations were purchased by Carmike Cinemas in 2014. Now the AMC Classic River Village 6 as a result of AMC Theatres buying Carmike in late 2016.

The AMC Classic River Village 6 closed for the COVID-19 pandemic along with the rest of the circuit. On September 20, 2020, AMC made the closure permanent with the River Village 6 just one of many theatres closed permanently by its circuit during the pandemic.

Looks like D’Place Entertainment reopened this theater around March or April 2021. https://dplaceentertainment.com/location/river-village

D’Place is an abysmal operator of this theater. The projector and screen aren’t lined up at all, the facility is run down.

Someone else needs to save this place