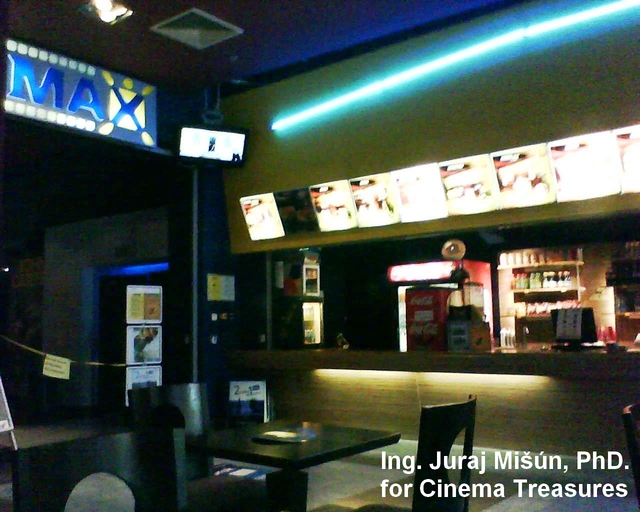 The CineMAX miniplex in southern Slovakia opened on 20th October, 2007 as the fifth in row in the CineMAX chain after the cities Trnava, Poprad, Trencin and Nitra. It is located in the shopping center MAX in the eastern part of the town. Nearby there are several other shopping centers in the form of retail parks.

The miniplex has a total capacity of 460 seats divided into three screens. The biggest auditorium has 222 seats, the two other 150 and 88 seats. The theater uses Christie projectors (CP2000 M), Doremi cinema servers (DCP 2000) and the XpanD-3D-system. Used audio technology is Dolby Digital Surround EX in all three auditoriums.

The shopping center MAX in Dunajska Streda has a large problems with tenant occupancy. While the ground floor is almost completely filled, the first floor has a lot of empty sites and several areas were connected to form a large furniture store.

In 2010, the miniplex screened 1,759 showings and had a total attendance of 20,552 spectators. This means that the average attendance was only at 11.68 spectators. Although no exact figures are available, the revenues of the site were the lowest among the multi-screen cinemas in Slovakia.

Therefore CineMAX Dunajska Streda is a hot candidate to become the first modern multiscreen cinema in Slovakia that will be closed. Although there is no competition in the relative rich district, the miniplex has major problems with the attendance of spectators. In mid-2011 the company has even considered a closure of the site.

The largest problem is the strong representation of the Hungarian minority, which can’t speak the Slovak language very well and therefore prefers to visit cinemas in the nearby Hungarian town Györ. Other factors are lower prices in Hungary for cinema tickets, concessions, petrol and also food.

The CineMAX Company attempted to fight against the weak economical situation in July 2011. It began to show films with Hungarian dubbing and subtitling. According to information of the company the attendance increased by 200 percent.

However, this caused some protests of the Slovak majority on the internet, where a mother with children complained that they couldn’t see the film “Smurfs” with Slovak dubbing. The company argued that movies in language of the majority were poorly attended, and therefore CineMAX tried to increase the attendance by including showings in Hungarian language.

It has the impression that the attempt failed. Initially (autumn 2007) there were bold plans, under which the miniplex in Dunajska Streda should screen at least ten showings a day. The current misery (thirteenth calendar week of 2012) is that the CineMAX screened only three showings on weekdays. During the next (Easter) week, the number of screenings has reached five on weekdays and six showings during the extended weekend, but the next (standard) week only three showings were screened.

The given situation in Dunajska Streda should be a lesson for competitive operators. The Ster Century chain plans to open a three screen miniplex in Levice next year (2013) in the planned shopping center ONYX 2. Similarly, the developer VAV Invest wants to open a two screen cinema in the Europa Shopping Center project (scheduled to open autumn 2013). The town Levice also has strong representation of the Hungarian minority.

Hi! I find the writing about Cinemax DS extremely good. Some comments though. The Hungarian “minority” talking of Dunajska Streda is actually a majority. About 75% of the population is Hungarian, so a cinema with Slovak dubbing/subtitles has a very tough job here. Slovak is not spoken at bilingual level but as foreign language(because in fact it is), ergo it’s more than natural that especially children/minor audiences will not be enthusiastic about films in Slovak version/subtitles. Today, it is February 7th 2015. There are 8 films to choose from, and only 2 with Hungarian dubbing. All the others are projected either in Czech original (Babovresky) or with Slovak subtitles/dubbing. In this special ethnic context I do not find it very clever as business strategy. (Try to take your children to watch the Spongebob movie in Dutch/French/Swahili etc. The experience you get will be the same.) The other problem, as very well underlined by the author is the closeness of Győr, which is the most important city in northwest Hungary with a very strong concurrent cinema, Cinema City Győr which offers for today 20 different films in Hungarian(six of them in 3D version as well). Let me point out an other issue: usually the freshly released films are projected in Győr a few weeks earlier than in Dunajska Streda(OR: some films do not get to Dunajska Streda at all). Anyway, something should be changed here to attract new audiences.