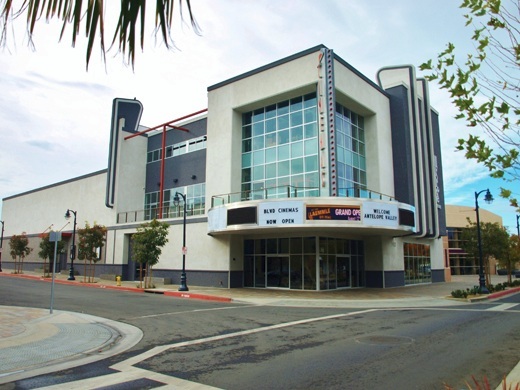 The Los Angeles Times noted that it was Laemmle Theatres first franchised operation. Greg Laemmle said: “We are proud to be affiliated with the new BLVD Cinemas. This is one of the most uniquely designed art house theatres we’ve seen, with all digital projection, luxury reserved seating, and a more robust cinema café menu.”

The cinema, with its industrial themed architecture, is attached to the Lancaster Performing Arts Center in the modernized downtown, known as the BLVD. Each of the three auditoriums has from 46 to 58 reclining leather seats from which patrons can eat, drink and enjoy films projected from Christie projectors.

They present a mixture of art, international and sometimes mainstream films. It was taken over by Tegency Theatres on December 2, 2017.

Apparently BLVD does stand for boulevard as in “The Boulevard.” The caps thing is just a marketing ploy. For more info, go here: http://www.newlancasterblvd.com/history.html