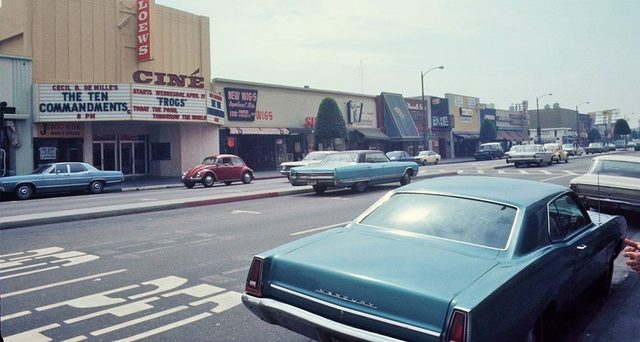 During the 1960’s, the Ritz Theatre presented first and second-run features. In addition, non-mainstream films like "Mondo Cane," "Lolita," and "Dr. Strangelove" played the Ritz Theatre. Here’s something really interesting: Over the period of about a year, the screen was moved forward into the auditorium, then back, then forward again. (I swear, I wasn’t on drugs! This really happened!)

On December 20, 1967 the name was changed to Loews Cine as it was operated by Loews. A new marquee was put in place, the lobby was remodeled, and the auditorium was decorated with blue curtains, including riser curtains for the screen. The opening feature after the remodeling was "The Bible."

When "I Am Curious (Yellow)" played the Loews Cine, the program was shut down. I remember walking by and seeing no letters on the marquee. A few years later, Russ Meyer’s "Vixen" played the theatre without incident. In the early-1970’s, the Loews Cine continued to present mainstream films, but the neighborhood changed and so did the audience. People would attend the theatre and, when the program started, they would jump onto the riser curtains and be pulled up to the top of the screen. This led to the machinery breaking down.

LOS ANGELES-Helm-Hoffman Enterprises, in which Phillip Hoffman and Bob Hellman are partners, has purchased Wendell Smith’s Ritz Inglewood Theatre Corp. and will operate the 700-seat theatre on an alternate first-run and seven-day availability schedule.

I grew up in Inglewood in the 1960s, and remember the Ritz well. They were a bit clueless about pairing films for their double features—I’ll never forget the double feature of “McHale’s Navy” (the big screen version of the inane TV series) with “Lady in a Cage” (an intense, largely mature-themed thriller).

Interesting photo of when it was a LOEWS.

Built in 1937, according to that defunct Loopnet listing.

Is the projection equipment still available?

Wow what a double feature. Lady in a Cage is a cult film now and has a great soundtrack. Avantgard in many ways. Theatre had a lot of art deco elements.

The Ritz has reopened as a live venue called The Miracle Theatre, often hashtagged as #MiracleOnMarket. They have hosted events such as the 2nd Season premiere of the HBO series “INSECURE”. Looks very nice.

This reopened as the Ciné on December 20th, 1967 with “The Bible” by Loew’s Theatres.