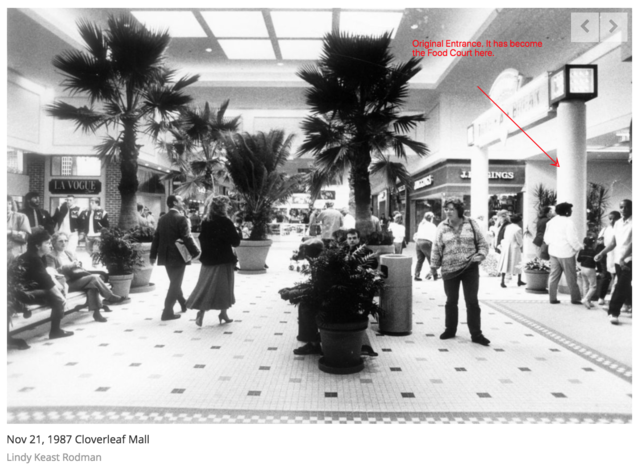 This twin opened in the mall on August 16, 1972 operated by District Theatres. The mall was the first large scale indoor mall in Richmond, it was ‘The Shopping Center of Richmond’ and had a Sears, the East Coast’s largest JC Penney, Thalhimers which later became a Hechts (May Co.) and over 75 other stores.

On March 31, 1982 Cineplex Odeon opened an 8-screen cinema (Cloverleaf Mall Cinemas #2) in a separate building way at the back of the mall site and the twin screen was closed and made into an 8 bay food court.

The entire mall closed in 2008, and as I write this in April of 2012, this once premier shopping destination in the Richmond area, is being demolished. At the same time the largest Kroger Market Place Store in the Mid-Atlantic region is being built. Also to be built is retail, restaurants, offices and 350 multi-family residences. You will never know Cloverleaf Mall or the cinemas were on the site! The new name is Stonebridge.

Cineplex-Odeon did not exist in 1982, so either you have cited the wrong company or wrong year. (Cineplex and Canadian Odeon both existed then but had not yet merged. And I do not believe Cineplex operated any theaters in the United States as of spring ‘82. Their first opened in the summer of '82, and it wasn’t this one.)

Also, isn’t the proper name Cloverleaf, rather than, simply, Clover?

Coate: From the previous comment about this theater; “Cineplex Odeon did not exist in 1982,so you have cited the wrong company or the wrong year.”

In 1982,this theater was owned and operated under Plitt Southern Theatres,which basically owned and operated a LOT a movie theaters in the South during part of the early-1980’s,and it remained that way until Cineplex Odeon bought them around 1987 or 1988. All of the movie theaters in the Southeast around the Carolinas or Virginia were under Plitt Southern Theatres,and it wasn’t until Cineplex Odeon took over the operations of the Cloverleaf Mall Cinemas until 1987.

You’re right about one thing Coate: Cineplex Odeon didn’t operated any theaters until 1982,and this was in the Midwest states where Cineplex Odeon was first established.

PLEASE CHANGE NAME OF CINEMA TO:

Michael Coate, thanks for pointing that out, I don’t know what I was thinking?

The 2-screen theater inside the mall was opened by District Theatres.

I worked in the original Cloverleaf Twin Cinemas in 1985 and 1986, or you could say from THE LAST DRAGON to FLIGHT OF THE NAVIGATOR.

I don’t recall the first owners for me being Plitt, but I’ll check pay stubs at home. I do know that the owners also owned the Broad Street Cinemas 1 & 2 because a “district” manager for both theaters kept his office there. I’m near certain though that Neighborhood Theaters acquired us in early 1986 and then Cineplex Odeon rather quickly acquired Neighborhood.

I believe the 8-screen, free-standing Cineplex Odeon behind the mall opened in 1988.