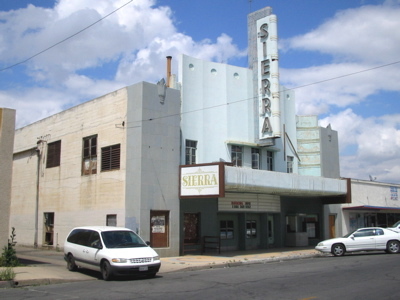 This beautiful theatre is located in the heart of the economicaly depressed city of Delano, 30 miles north of the city of Bakersfield, in Southern California. It has one screen and has one screening a night. The Sierra Theatre was planned in 1938 (to the designs of architect S. Charles Lee), it was eventually built for Panero Theatres to the designs of architect Vincent G. Raney. It opened on August 6, 1946 with Dana Andrews in “Canyon Passage”.

It seems the Sierra Theatre was closed in 2008.

I can’t find current movie listings for this theatre on the Internet. Is it still open?

California Index contains several references to theatres in Delano, but I don’t think any of them refer to this one. The drive-in which became the Del Mac is mentioned in a citation of a 1950 article from Architect & Engineer, as having been designed for the Valley Drive-in Theatre Company by architect Vincent G. Raney, and having cost $160,000. I wonder if Raney could also have designed the Sierra? He did use the moderne style, as in the 1945 Court Theatre in Livingston.

There are also a few references to the West Theatre, which was sold in 1939. The buyer and seller both had Japanese surnames, and the West was located on Fremont Street, a few blocks out of the main part of town, so I’m wondering if it might not have been a theatre that catered to the fairly large Asian population in Delano, which I believe still has substantial Korean and Filipino communities today.

Another theatre cited in the Index is not named, but is mentioned in a Southwest Builder & Contractor article of February 29, 1924, as being planned as part of the proposed Grower’s Security Bank building, being designed by Bakersfield architect Charles H. Bigger, who was very active around that time. I suspect that this building may have been the Delano Theatre, which stood for many years (and may still stand) at 1008 Main Street.

The Sierra Theatre was apparently designed by none other than S. Charles Lee, in 1938, for an owner named Frank Panero. An article in Southwest Builder and Contractor of May 20, 1938 announced that Lee was preparing the plans for the theatre, giving the projected cost as $25,000, but claiming a seating capacity of merely 350, which would be rather small for a building of the Sierra’s size.

The website for the S. Charles Lee collection at UCLA contains no photos or drawings of the Sierra, but the finding aid reveals that information on the theatre can be found in Box 6, folder 15 of the collection, and either plans or renderings or both are in the collection’s oversized folder 250.

The finding aid also reveals the existence of a Lee-designed (or perhaps remodeled) Wasco Theatre in Wasco, California (a few miles from Delano), also designed for Frank Panera. No photos or drawings of the Wasco on the website, either, but here’s a photo of it from the Kern County Library’s collection. The Wasco now houses a church.

Also, note that the Lee website uses the spelling “theatre” for all the theatres he designed. It is also the spelling on the marquee of the Wasco.

Thought you would like to know that the Sierra Theatre was, in fact, built for Frank Panero. He was my grandfather. My mom, Frank’s daughter-in-law, said that Frank Panero bought the Wasco Theatre and had it renovated. Those are just 2 of many theatres that were owned by Frank Panero.

Frank Panero was mentioned in a Fresno Bee article dated 6/27/29. he was the owner and manager of the Delano Theater, which was damaged in a fire on that date.

Indeed this has major hallmarks of S. Charles Lee’s work: The lotus-shaped sculpted elements on the end bays of the facade, the large flutings on the central curved portion, and the horozontal neon bands and more acutely-curved sections between the aforementioned elements—one can find these all on other Lee theatres.

The Southwest Builder and Contractor article I cited in my February 20, 2008, comment above was from May, 1938, but it appears that the construction of the Sierra Theatre was delayed for many years. The opening of the Sierra was announced in the August 17, 1946, issue of Boxoffice Magazine, which said the house had opened on August 6. The opening feature was “Canyon Passage.”

The article did say that completion of the project had been delayed due to shortages of materials, but it seems unlikely that such a delay would have lasted six years. Most likely, construction was not begun until near or shortly after the end of WWII.

The Boxoffice item also gives a much larger seating capacity- 894- than the Southwest Builder & Contractor article had. The theater obviously must have been redesigned between the original announcement and the actual construction.

The article adds that Frank Panero and his sons Ernest and August would continue to operate the Delano Theatre, as well. It also said that in addition to the Delano houses the Panero Theatre Company was then operating two houses in each of the valley towns of West Delano, Shafter, Reedley, and Wasco, and one house each in McFarland and Sanger.

Here is another 1982 photo:
http://tinyurl.com/ydbmzq3

It turns out that S. Charles Lee’s 1938 design for the Sierra Theatre was not carried out. The theater as opened in 1946 was designed by Vincent G. Raney. There are a couple of small photos from the time of the opening in Boxoffice of November 2, 1946.

Here is another photo:
http://tinyurl.com/y8qdcrw