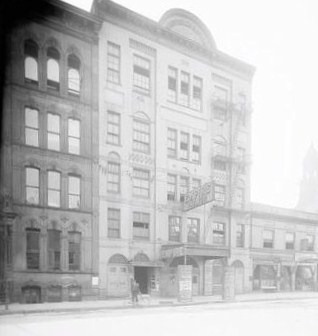 A sharper, more detailed view of theater can be seen here.

Landmarks of Wayne county and Detroit, by Robert Budd Ross and George Byron Catlin, published in 1898, had this to say about Campbell’s Empire Theater:

“The Empire Theatre, on the south side of Lafayette avenue, between Griswold and Shelby streets, was built by Dr. M. Campbell and opened on Christmas day, 1893. "The Kentucky Girl,” with Sadie Harrison in the principal role, was the first performance. When the Detroit Opera House burned on October 7, 1897, it was leased by Brady & Stair, and the high priced companies who formerly played at the Detroit Opera House were transferred there until the latter house was rebuilt.“

I noticed that in the photo CSWalczak linked to, the upper wall has the year 1887 carved into it. I don’t know how that can be reconciled with the claim in the book I linked to that it opened in 1893, unless it took Dr. Campbell six years to get the building built.

This would appear to confirm the opening date of 1893:

Campbell’s Empire Theatre was opened last night at Detroit, Mich., with Sadie Hasson in A Kentucky Girl. The new theatre is erected on the site of what was formerly known as Latimer’s Livery Stable, and comprises 17 and 19 Lafayette Avenue. The house is heated by steam and is lighted by both gas and electricity. The seating capacity is 2,000. There are eight boxes, all upholstered in red plush and draped with chenille. The general decorations are in panels and in colors. The stage has fifteen complete scenic settings, supplied by Sosman and Laadis, of Chicago.

Dr. Campbell, who is to manage the new house, has the advantage of extensive experience. In 1869 he built and owned the Jersey City Opera House. In 1870 he built and managed the Grand Central Theatre of Brooklyn. A few years later he leased the Metropolitan Theatre of New York city, and formed Campbell’s Circuit, to which he subsequently added the Comique and Globe theatres of New York. In 1882 he began devoting himself entirely to the circus business, and sometime after that retired from the amusement business altogether."