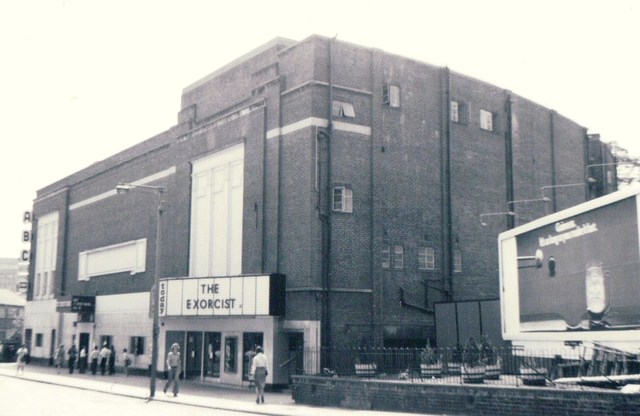 The Regal Cinema was opened on 25th September 1937 with Jack Oakie in “That Girl in Paris”. It was built for and operated by the Associated British Cinemas(ABC) chain, and was designed by their in-house architect William R. Glen, assisted by local architectural firm Penty & Thompson.

The fan-shaped auditorium ran parallel to the street, with the entrance at the right-hand end. Seating was provided for 932 in the stalls and 788 in the circle. The proscenium was 32 feet wide. The Regal Cinema was equipped with a Compton 3Manual/6Ranks organ with an illuminated console on a lift, that was opened by organist Wilfred Southworth.

The Regal Cinema was re-named ABC in 1961. In September 1972 it was closed for conversion of the rear stalls into a Painted Wagon pub, and the cinema re-opened 27th November 1972 with 680 seats in the circle area only.

The local architectural firm Penty & Thompson, only acted as an agent for William Glenn. They had no design input.. Basically Day to day dealing with the builder and Local Authority..

It closed a month after the sly and underhand takeover by that Cannon shower of the ABC Circuit – thereby sparing the ABC York the indignity of having the tatty Cannon signage attached to the building as well as the horrid day titles on the screen and the nasty artwork in the press…….

I can remember going to this cinema when it was being demolished taking down light fittings and toilet signs pulling up the ABC style carpet which all went into the Palace at Malton which myself and colleague had just leased to re-open as a cinema.

I have uploaded a photo of the ABC shortly after renaming showing the gritty prison drama, ‘The Criminal’ in 1961.