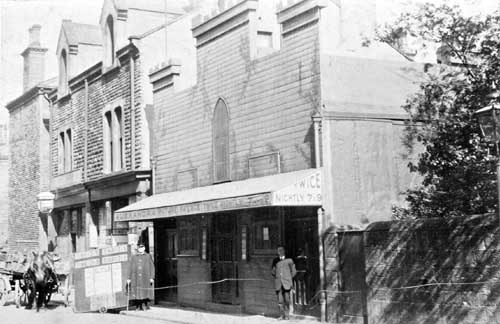 Located in the Woodhouse district of Leeds. The Alexandra Picture Theatre was originally planned in the summer of 1912 as the Empire Picture Palace, built for the Universal Cinema Co. Ltd. and designed by Leeds based architects Chadwick & Watson.

It opened as the Alexandra Picture Theatre on 30th September 1912 with a 3-reeler “The Sphynx” and “The Passer-By”. It was closed on 9th April 1938 with Otto Kruger in “Counsel For Crime”, and has since been demolished.

My father ran the Alexandra Cinema when he returned to Leeds after WW1, until it bankrupted him in 1924! In the Court papers he is described as a picture house proprietor. “lately carrying on business at the Alexandra Picture Theatre, Camp Road, Leeds”

Initially he managed it for somebody else and then took it over when the other person decided to get out. We used to have some small cans of film around the house when I was young, in the 1930s. Also in the house was his top hat and silver headed cane which were part of his attire when welcoming customers and enticing others off the street.

My mother met him there, as she was a pianist and had the job of playing the mood music for the films. A lot of the music was extemporised, but I remember her saying that William Tell Overture was a favourite for galloping horses. Derum, derum,derum dum-dum.

There were a lot of problems with films breaking, generally due to operators cutting sexy stills out of films and not joining them properly.

My father blamed some of his problems on the development of the major new cinema chains in the city centre, where comfort and latest equipment made it difficult for the others to compete.