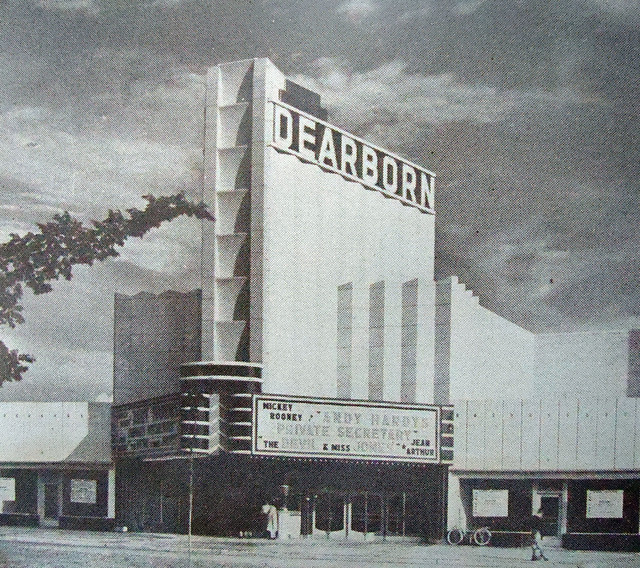 In the late-1960’s, a small 300-seat auditorium was added to the theater, called the Dearborn Living Room.

In the 1970’s, a third screen was added to the Dearborn. By this time, it was now called the Dearborn Entertainment Center. It was also one of the first theaters in the state of Michigan to serve alcohol, along with Wayne Amusement’s Quo Vadis.

In the 1980’s, the original nearly 1,500-seat auditorium was carved into four smaller auditoriums, and in 1986, the complex was sold to National Amusements. During its six-year operation of the Dearborn, National Amusements added yet another three screens. In 1992 it was renamed Showcase Cinemas Dearborn. Though a bit frayed around the edges, the Dearborn remained a popular venue for seeing the latest first-run films.

Showcase Cinemas NA is owned wholey by National Amusements, which is owned primarily by Sumner and Shari Redstone (That is important to note as they have not agreed in years, and Sumner is trying to buy her out). National Amusements is considered the Parent company of Viacom, as it is the largest corporate share holder, and third largest, with Shari and Sumner holding the second and first largest shares (respectively) of Viacom.

Yes, that’s it – as it looked then. Here’s a link to a site that has two pictures of what it looked like after closing (scroll down to see them. View link

Status should be closed.

Here is another photo. Did they finish demolishing this theater?
http://tinyurl.com/ycxzmg2

This theatre was recently demolished.

Hope someone saved the one sheet frames.

A Staybridge Suites and Holiday Inn are almost finished being built on the site. There used to be a Wendy’s on the corner next to the theater, and there was talk of a Sonic going in but that never came to fruition.