An aptly named twin theater, Le Duet cinema, opened on December 22, 1965 with Audrey Hepburn in “My Fair Lady”. Ralph Shrader and his wife, Mimi* (my first wife’s paternal grandparents), lived several blocks away on Kennard Way, and, at Ralph’s urging, were first in line at the opening; they were admitted free. The theatre was set back from El Camino Real by a parking lot and beckoned to patrons with a pleasing neon sign in aqua-colored script. When one auditorium was divided, making the theatre a triplex, a new name had to be found, so the theatre took its name from its location in the Hacienda shopping center. The signage was somewhat hastily retrofitted to advertise the additional screen. I attended one movie there, in 1989, and have only a vague memory of the auditorium walls being colored in light aqua blue-grey fabric or paneling.

In the 1990’s, the entire shopping center was rebuilt from the ground up, leaving only the name Hacienda to hint at what once was.

*Interestingly, Mimi (Graves) Shrader was cashier at the El Capitan in San Francisco when it opened. Later, she rose to the position of Head Usherette.

I have many fond memories of the Hacienda in the late ‘80s and early '90s. Saw tons of movies there on the cheap. Towards the end it was a $1 movie house. I think The Addams Family was playing at the time it closed. It certainly wasn’t elegant, but it was great entertainment value.

The Hacienda Cinemas was my first job. I worked there in 1985. It was a second-run discount theater that showed movies about 6 months after they came out. I must have sat through Terminator and Runaway with Tom Selleck about 20 times. It was a good job – the pizza place next door would trade free pizza for free movie tickets. One thing I remember was that we didn’t pop our own popcorn – we bought it in huge plastic bags already popped and just poured into the heater bins. Yuck. I still don’t eat much popcorn to this day.

The Le Duet opened with one screen on December 1st, 1965 and Officially on December 22nd, 1965. Theatre claimed to be the first in the world where every seat is the “best seat in the house” 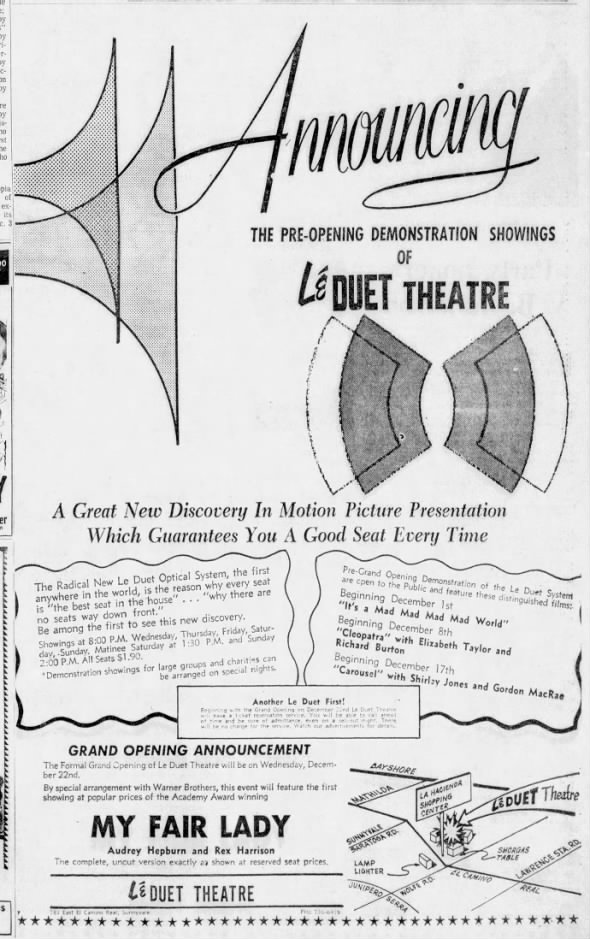 Reopened on September 30th, 1966 after a new screen was installed. the “le Duet optical system” flopped.

Taken over by West Side Valley theatres and renamed Cinema Hacienda on June 16th, 1967. Another ad posted.