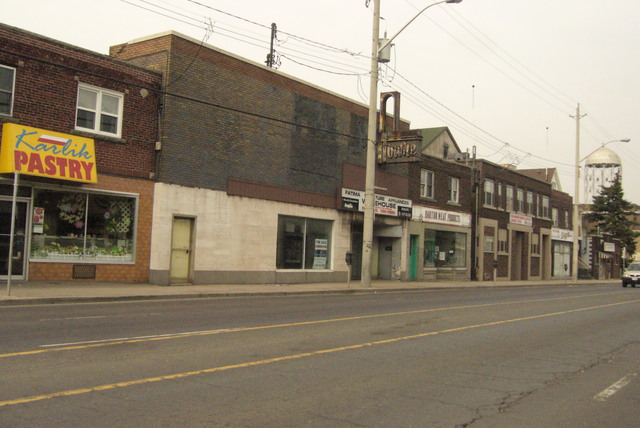 Opened back in the late-1940’s as the State Theatre with only one screen, but in the late-1960’s it had become the Towne Theatre.

The Towne Theatre closed in the late-1980’s and became a retail store. It was converted into office and community use in 2012.

I’m still trying to nail this one down, but I think I’m willing to put money on the fact that the Towne began as the State, at 758 Barton Street East.

Correct Towne and the State were the same theatre.

Yes, the Towne was formerly called the State. A photo of the State can be seen at: www.hamiltonmagazine.com/sitepages/?aid. It is part of an article about Hamilton movie theaters (by John Sebert).

Now, I’m relying on my memory, but my info is generally correct. I think the State was closed for a period of time during the early 1960’s. The theater was renovated and reopened c.l968 as the Towne, with a roadshow/reserved seating policy. The first movie shown was “Funny Girl”. I can’t recall how long this policy lasted or what films followed after. Eventually, the theater ran double features of second-run movies. The Towne sign can be seen in the Google street view. The three-sided letter board/marquee of the State was retained, but was removed many years later.

This theater was never called Towne Cinemas. It was not twinned “in the late 1970’s”, or ever. The information above is very incorrect. It did have a balcony (probably loges), but was a single-screen theater ‘til the end. The Towne closed in the late 1980’s. It is interesting that the Towne sign remained on the building until mid-2011. In all those years, none of the businesses used “Towne” as their name. And the odd time, in the evening, the sign would be lit up! Pink neon.

Currently, the building is undergoing a complete transformation. As of January 2010, the interior was being totally gutted. At that time, all that remained was the framework of the balcony and the terrazzo inside the front entrance. As of March 2012, the facade is being changed and an addition has been added to the rooftop. It appears that the former theater facade will be totally gone when the alterations are finished. Hang onto that Google street view! When the building reopens, it will be the new home of the Portuguese Support Services For Quality Living. They are currently at 746 Barton Street, just west on the same block.

The building renovation is finished. The PSSQL occupies its new home. A note on the door at 746 Barton states: We Moved Locations 760 Barton St. E. The former facade is totally changed. The terrazzo in the entrance is gone. Original terrazzo was exposed in the alternate exit (far left in google image) but has been covered with tiles.