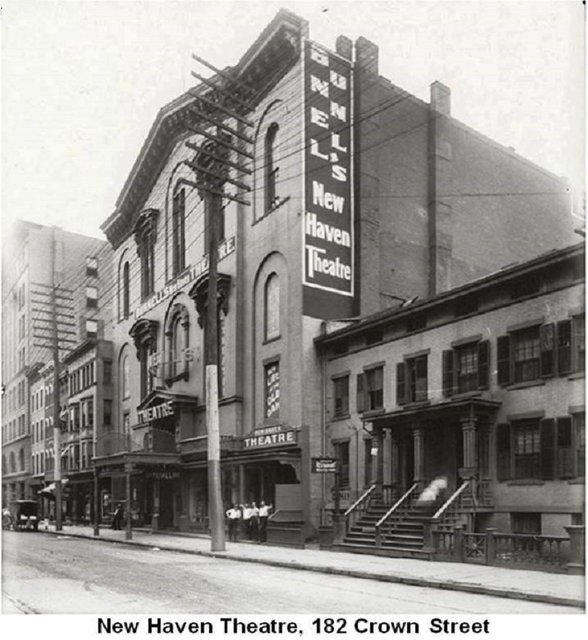 The Music Hall in New Haven, CT. was opened in 1860. It was later renamed Grand Opera House and later Brunnell’s New Haven Theatre. By 1914 it had been renamed Grand Theatre. On April 25, 1915 the theatre was destroyed by a fire, caused by a firework.

The Hyperion Theatre in New Haven was the leading legit theater there circa-1900. It was a popular house for pre-Broadway tryouts. I don’t know if it was later named “Bunnell’s New Haven Theatre”; however, according to its entry in the 1897-98 edition of the Julius Cahn Official Theatrical Guide, the Manager in 1897 was one G.B. Bunnell. Unfortunately, there are no street addresses in this Guide. The Hyperion was on the ground floor and its seating capacity was 2,128. It had a large stage 65 feet deep. At the time there was also a Grand Opera House in New Haven, with 2,332 seats.

This house was called the Music Hall, under which name I’ve found it mentioned as early as 1877, the Grand Opera House, and the New Haven Theatre. The building also housed Bunnell’s Museum. Andrew Craig Morrison’s Theatres (a book of drawings by Dumas) gives the address as 182 Crown Street.

THE THEATER PICTURED IS THE BUNNELL’S THEATER ON CROWN STREET IN NEW HAVEN. THE HYPERION THEATER (LATER NAMED LOEW’S COLLEGE) WAS ON COLLEGE STREET NOT FAR FROM THE ROGER SHERMAN THEATER. LOEW’S COLLEGE ORIGINALLY HAD A SECOND ENTRANCE / EXIT ON CHAPEL STREET.

This page at GenDisasters features the text of an article from the April 26, 1915 issue of The New York Times about the destruction of this theater by fire the previous day. The house had been built in 1860.

It is likely that this was the house listed in the 1914-1915 American Motion Picture Directory as the Grand Theatre, 184 Crown Street (the building most likely occupied a double lot, 182 and 184.) Twenty-two movie theaters were listed at New Haven.

I recently added a NY Times article from 4-25-1915, talking about the fire, and some of the theatre’s history too.