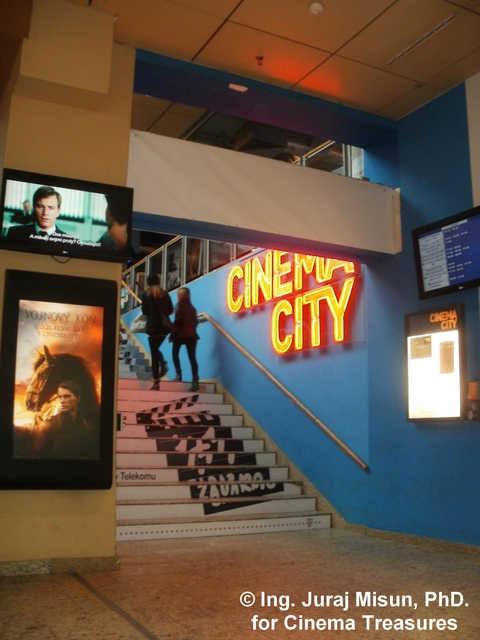 Cinema City AuPark is the largest multiplex cinema in Slovakia (as of 2012). It is a part of the Israeli chain Cinema City International with other operations in Central European countries Poland, Czech Republic, Hungary, Romania, Bulgaria and in Israel. It has 12 screens and a total capacity of 2,338 seats.

Besides AuPark the Israeli operator also owns two other multiplexes in the capital city of Slovakia Bratislava, the March 2010 opened Eurovea theater which has nine screens and the oldest multi-screen theater in Slovakia Polus which has eight screens.

The AuPark multiplex was opened in May 2002 under the name UCI Palace Cinemas. United Cinemas International (a partnership of Paramount Pictures and Universal Studios) invested about 6 million US$ into its construction. Later the theater was separated from UCI to the Palace Cinemas chain with operations in the Czech Republic, Hungary and Slovakia.

By the number of seats it was the 5th largest site of the Palace Cinemas chain by the end of 2010, when the central European Palace Cinemas cinema chain had 22 sites and 185 screens total.

The multiplex is situated in the western part of the AuPark Shopping Center. Other entertainment establishments in the mall include a casino, bowling alleys and a fitness center.

In January 2011 the AuPark multiplex was sold among other Palace Cinemas theaters to the Israeli company Cinema City International for €28 million. In the autumn of that year it changed its name to Cinema City AuPark. Between 30th January and 15th March 2012 the multiplex was in a total reconstruction. Its auditoriums were refurbished, but the theater remained open and only decreased the number of daily showings. This is an evidence of the fact that the AuPark cinema is one of the most effective theaters of the Cinema City International chain.

All twelve screens are digital. Mostly using digital video technologies Barco projectors, Doremi cinema servers and the Korean MasterImage-3D-system. The biggest auditorium with 470 seats has the largest screen in Slovakia.

In 2010 the theater screened 18,448 showings and was attended by 680,086 visitors. This makes the AuPark multiplex the clear number one in the Slovak Republic. Results in 2011 are likely to decline, given the internal competition in the form of Eurovea theater. Total sales of all three multiplexes in 2011 reached € 8.8 million, box office revenues €5.6 million and the attendance 1.2 million viewers.

The status of the largest multiplex AuPark will likely keep it going for a long time. A project for a 14-screen multiplex from the investor of MAX malls won’t be realized in the near future.

However, it can be expected that another cinema operator will seek to enter to the capital city Bratislava, the most lucrative cinema market in Slovakia. The competitor will try to fight against Cinema City International with lower prices. A project with high expectations for implementation is located in the northwestern part of Bratislava and is called Bory Mall. Further details on the number of auditoriums or seats are not yet known, talks with an unnamed operators, however, are ongoing.

The three photos I’ve just uploaded (on 1st November) were taken in May 2011.