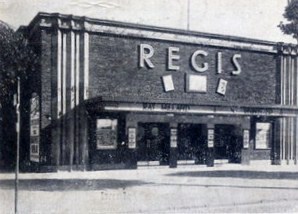 Located in the Gipsyville district west of Hull. The Regis Cinema was built by an independent operator in association with the County Cinemas chain. It was identical to two other Hull suburban cinemas, the Rex Cinema, Endyke Lane & the Royalty Cinema, Southcoates Lane, East Hull. All were designed by architect Robert Cromie.

The Regis Cinema was taken over by the Associated British Cinemas(ABC) chain on 8th November 1937, together with the Rex Cinema and Royalty Cinema.

The Regis Cinema was closed by ABC on 24th October 1959, and has been demolished.