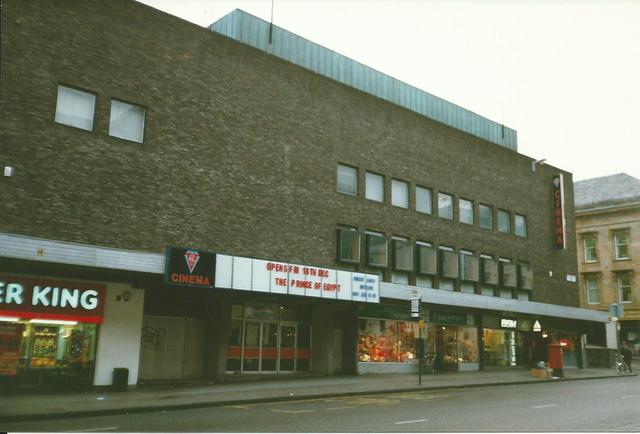 Located in Glasgow city centre. The building has a long history of entertaining the public. It was built and opened in 1875 as the Diorama, became the Panorama in 1888, and altered in 1895 as the Ice Skating Palace, where cinema shows were held from 26th May 1896.

Further alterations in 1904 changed the building to the Hippodrome, used as a circus. It was taken over by Hengler’s Circus later that year. Films were screened out of season. After many years as a successful circus, in 1927, it was converted to the Waldorf Dance Palace.

Taken over by the Associated British Cinemas(ABC) chain in 1929, they commissioned architect Charles J. McNair to alter the building into a ‘Super Cinema’. The Regal Cinema was opened on 13th November 1929 with Al Jolson in “The Singing Fool”. Seating was provided for 2,359 in stalls and circle levels. There were three large panels on the splay walls each side of the proscenium, each having painted murals of autumnal scenes. The Regal Cinema was equipped with a Compton 3Manual/12Ranks organ. It also had a large restaurant, for the convenience of its patrons.

When a wide-screen was installed in 1955, the proscenium and side splay-walls were given a modern style makeover. In October 1967, the Regal Cinema was re-named ABC 1, and a new construction was built adjacent on the right-hand side of the building which contained ABC 2 which opened 19th October 1967 with “Far From the Madding Crowd”. This was a 922-seat stadium style cinema, designed by architect C.J. Foster.

The building stood empty and unused until 2002. It was then converted into a mixed use entertainment building which includes bars, restaurants and a concert venue, known as the O2 ABC.

The O2 ABC suffered extensive damage by a fire on the late evening of 15th June 2018. The roof of the theatre collapsed due to the amount of water being projected onto the fire. The group ‘Foo Fighters GB’ were due to give a concert on 16th June 2018. The 922-seat Screen 2 built in 1967, in use as a Jumpin' Jaks nightclub and a Yates’s Wine Lodge among other uses, survived the blaze.

The fire began in the historic Glasgow School of Art at the rear. Designed in an Art Nouveau style by Charles Rennie Mackintosh from 1899-1907, that category A-Listed building was nearing completion of renovations following damage suffered in a fire on 23rd May 2014.

My scanned photographs were taken in December 1998, when the cinema was fully open.

Various interior shots have been uploaded to the ‘photos’ section.

Photo uploaded of Gerald Shaw at the Compton organ; he was later to become the resident organist of the Odeon Leicester Square.

The ABC was destroyed by fire last night along with the School of Art next door according to press, images show the roof has collapsed https://www.mirror.co.uk/news/uk-news/glasgow-school-art-fire-o2-12719173

Remarkably, aerial photographs appear to show the 1967 ABC 2 has survived.

Just uploaded a picture of the fire damage.

For Me. This Theatre had just as much design merit as the School of Art.. Mutter.. Mutter… Mutter.. You can guess what I feel.