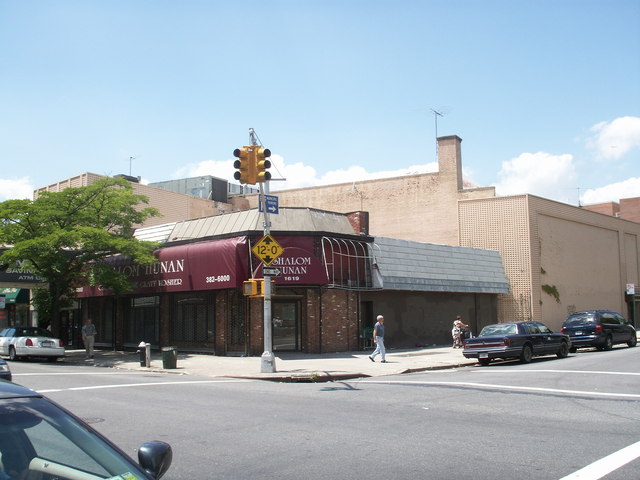 Opened on January 22, 1937 with Gladys George in “Valiant Is the Word for Carrie” & Johnny Weissmuller in “Tarzan Escapes”. The Elm Theater was a small theatre that was situated on Avenue M and Elm Street, for which it was named. In the 1960’s, it was showing foreign films, but by the 1970’s it was showing more adult themed fare. Nothing seemed to work in the small neighborhood house with a small balcony, and it was the first Century house to close in 1973. A bank branch is now housed in the gutted theatre.

Another sidebar of this theatre is that it stood blocks way from both Brooklyn’s former NBC studio, and the studio and lot of Vitagraph Pictures. Both are still standing with the latter now serving as a Yeshiva.

I have a charming memory of the Elm. When I got out of the army in ‘68, I reunited with a grade school friend of mine, and we went to this cozy little jewel of an art theater to see “Juliet of the Spirits” which we both enjoyed. Right in Brooklyn ! Imagine ! frankie from Brooklyn

I saw my first movie – “Rebecca” – at the Elm when I was about 4 or 5. It had an upstairs lounge furnished in art-deco (purple sofas, oval mirrors, bronze lighting fixtures). During the years I attented PS 199, I spent many Saturday afternoons there watching two full feature films, the news of the week, several cartoons and a couple of trailers (about 4 ½ hours of viewing), all for the price of a quarter. I have a distinct memory of kissing my first girlfriend – in the childrens' section!

I took two photos of the Elm last May.

The Lobby entrance, which doesn’t look all that different than it did when last used as a theater.

“The Producers”, “City Lights”, and “A Man For All Seasons”.
And Bonaparte’s restaurant.

Herman Pitt has been transferred from the Rialto to the Elm, Brooklyn. Arthur Novak changes places with Pitt. Moe Weiss has gone from the Strand, Rockville Center, L.I., to the Franklin, Franklin Square, L.I.

Small grand opening uploaded in the photo section for this cinema.