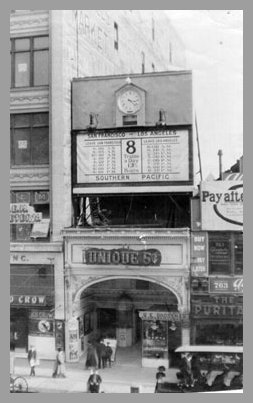 Information about this theater from online and other sources is very inconsistent and contradictory, though pictures of this theater exist. Jack Tillmany’s book “Theatres of San Francisco” puts the theater at 757 Market Street which is where the Four Seasons Hotel is today.

According to an article written by Susan Saperstein for a San Francisco Newsletter for San Francisco City Guides, the Unique Theatre was opened by Sid Grauman (and his father, David) as one of Sid Grauman’s earliest theaters, presenting both vaudeville acts and movies, sometime after 1900. According to Ms. Saperstein, the theater was destroyed, along with Grauman’s other early San Francisco theater, the Lyceum Theater, in the 1906 earthquake and fire. The Tillmany book says the theater opened in 1909 and survived until 1934, after being apparently renamed the Wonderland Theater.

However, according to the Wikipedia entry for Sid Grauman, the Graumans gutted the interior of the Unique Theater in 1906 prior to the earthquake as they had lost the lease on the building and did not want it used again as a theater. The article also indicates that the theater was on Market Street near Mason Street, which would mean that address was probably in the 800’s.

The July 15, 1916, issue of The Moving Picture World had an article about the pioneer movie exhibitors of San Francisco, including D. J. Grauman. Grauman is quoted as saying that he had opened the Unique Theatre “…about 18 years ago….” with vaudeville and moving pictures. Here is the section about Grauman and the Unique Theatre:

“A REVIEW of the early days in the moving picture industry in San Francisco would be incomplete without a reference to D. J. Grauman, who has continued his connection with the business until the present time. Shortly after the first moving picture show was opened here Mr. Grauman arrived from Alaska, where he had been working off a touch of the gold fever, and for a time was with ‘Pop’ Furst, who had a small theater in the very heart of the city. Shortly after he became settled here he took over a store on Market street, between Mason and Taylor, and here was opened what Mr. Grauman believes to be the first ten-cent vaudeville house in America, the Unique theater, moving pictures being one of its leading attractions.

“‘When I first began showing moving pictures,’ said Mr. Grauman, ‘a hundred foot subject was regarded as being a long feature. Most of these came from France and England, and some of them were splendid pictures, as would be shown if run through a modern machine. Everything had to be bought outright and as there were but few made it was necessary to run them for a long time. People saw the same subjects over and over again, but there was never any complaints on that score. My stock of pictures was quite extensive and frequently I had from $3,000 to $5,000 tied up in these, an item of expense that the present day exhibitor knows nothing of.

“‘One of the funniest subjects ever shown at the Unique theater was a French picture known as A Trip to the Moon. This created quite a sensation at the time and I showed it a great many times. In time Edison started making pictures, but the first ones were poor in quality and it was some time before they reached the standard set by the foreign makers.

“‘When the Unique theater was opened, about eighteen years ago, five acts of vaudeville and about 100 feet of pictures were given for ten cents, and the vaudeville acts were not the lengthy kind seen today. Short shows, short intermissions and no delays between the acts were the order of the day and there were always crowds waiting to get into the house. This little theater is quite a contrast to the Empress theater of today where eight acts of vaudeville and five reels of moving pictures are given for the same price of admission, ten cents.’

“Following the fire of 1906, Mr. Grauman re-opened for business in the Fillmore street district and when the downtown district was rehabilitated, opened the Imperial theater on Market street, which is regarded as being one of the finest moving picture houses in the city at the present time. He is now associated with his son, Sid Grauman, in the management of the Empress theater.”Other sections of the article also indicate that Grauman opened the Unique Theatre about 1898. Early film dealer Peter Bacigalupi is quoted as saying that he brought back a number of films from Paris in 1900 and sold most of them to Grauman for exhibition at the Unique.

The entire article, which includes a small, early photo of the Unique Theatre, can be seen online at at this link courtesy of Google Books.

Note that the magazine article I quoted in the previous comment places the Unique Theatre on Market Street between Mason and Taylor. The October 13, 1922, issue of a magazine called Holly Leaves has an article about Sid Grauman, and says that the Unique was on Market Street near Sixth Street, which does intersect Market across from Taylor Street. I believe San Francisco renumbered the blocks along Market Street sometime after the 1906 fire, and the historic address 757 probably was where the magazines say the theater was, between Taylor and Mason.

Another contemporary source confirming the location of the Unique Theatre is a supplement to the trade journal Engineering News dated May 2, 1907, which has the following in an item about new construction in San Francisco:

“A steel frame, 7-story building of brick and terra-cotta construction is to be erected on the north line of Market St., between Mason and Taylor Sts., for Louis Metzger and Louis Shoenberg, to cost $125,000. The building will consist of basement and first and second stories for business purposes. The upper five stories will contain 75 rooms, which will be let as a hotel. The lot extends through to Turk St. and is the site of the old Unique Theatre.”

If the 7-story building was built, it is apparently no longer standing, or perhaps has lost most of its upper floors. The pre-fire site of the Unique would have been a few doors east of the post-fire Warfield Theatre. I believe the address of the first lot on Market east of Taylor that runs through to Turk Street is 944 Market, so the modern address of the Unique’s site would most likely be that number or a number just a bit lower.

You’re right. I missed the location in the caption.

Here’s an article about David Grauman and crew wrecking the interior of the Unique in January of 1906.

An article on p. 3 of the October 26, 1904 edition of the San Jose Evening News “Bank Robbers Are Caught” appears to be actually a synopsis of an evening’s fare at the Unique. The article describes Sid Grauman colorfully narrating the film that was a part of an evening’s offering of vaudeville and film. I think this activity may have been a sort of precursor to his later famous Prologues at his theaters in Los Angeles. View link

I think the 1904 article might have been about the Unique Theatre at 24 E. Santa Clara Street in San Jose, which was also operated by the Graumans.

Ah, that is most likely the case then. However given Grauman’s flair for showmanship, I would suspect he did the same thing from time to time at the San Francisco location and at other locations the Graumans operated in northern California.

There were two Market Street houses called the Unique Theatre, one before the fire and one after. The pre-fire house was the one operated by the Graumans and located on the north side of Market between Mason and Taylor. The house at 757 Market, which was on the south side of the street opposite the end of Grant Avenue, was built after the fire and was not operated by the Graumans. Here is a paragraph from the July 15, 1916, issue of The Moving Picture World that mentions the second Unique Theatre:

“Probably the second house to be opened on Market street [after the fire] was the Gold Palace of I. H. Lichtenstein, about opposite Sixth street. This, however, did not prove to be a success. Then came the Unique theater on Market opposite Grant avenue. This house occupied the entire building in which it was located and was the first one that was not merely a converted store. It is still conducted by the same company that originally built it, in conjunction with the Odeon theater a few doors below, under the direct management of Joe Huff. Both of these places have been kept thoroughly abreast of the times in the matter of equipment and furnishings and a little over a year ago changed from a five-cent to a ten-cent policy. Paramount pictures are now being shown, together with Chaplins, of which a feature are made. These houses have a combined seating capacity of about 700.”

If the Unique and the Odeon had a combined seating capacity of about 700, we’ve overestimated the capacity of the Unique, unless it was later enlarged (which doesn’t seem likely if it “…occupied the entire building in which it was located….”)