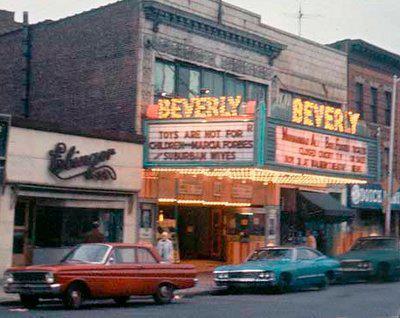 The Beverly Theater was opened on January 17, 1920. It another small house that was once run by United Artists and then the Golden Theater chain. It was a dollar theater before being twinned in January 1976, and going first-run.

It closed in September 1981, with the lobby turned into retail use and the theater becoming a yeshiva. A few years back, the auditorium was completely demolished to become a Public School of the City of New York. The former front of the theatre and lobby are retained in retail use.

I walked past there today, and it pretty much looks the same as the way it looked when I took the photo in 2009. That 99 cent store in the Google Street View is gone, has been for a few years.

I saw a number of movies at the Beverly in the 70s, when I was living in Prospect Park South. I definitely saw “The Eyes of Laura Mars,” “The China Syndrome,” and “The Awakening” there, amongst others. I don’t think there was a balcony, but wasn’t the auditorium large-ish? At least, I remember it as kind of big.

I worked here when Golden took over from United Artists in 1975. They re-opened with the watered down versions of “Devil And Miss Jones” and “Deep Throat” that were not the “XXX” versions. The Dahill Area Association picketed from day one and was Daily News fodder for the next week. People who came by-passed the pickets and were mad on the way out because of the edited versions of both pictures. One afternoon at the change of shifts during the tail end of the first week, the manager Mr. Henry S. was on the way out at six o'clock and I was covering the evening, the theatre was raided and the films seized to the cries of victory from the protesters. At that time, I called Mr. Henry, who was leaving in the lobby and told him to come back. He said his famous line “Blessed Savior Dear!” and came in to be arrested along with the projectionist who made a bee-line to the front doors. Once in the projection booth the “Raiders” seized the films and smelled the distinct pungent aroma of marijuana. The next day we were back in business. Within a week, the Goldens' stopped showing the “X” movies and opened with “Blazing Saddles” and “The Producers” with a $1.00 Price Policy At All Times. This was never an “XXX” policy theatre at any time. The owners wanted to make money with “XXX” rated films so they could twin the theatre. As far as the theatre goes it had a large raised stadium style seating and orchestra. UA left the theatre a mess and the mice had a field day as the theatre was dirty and had sticky floors. After Mr. Henry retired, I became the manager at 19 years old. The theatre at $1. turned in some remarkable figures for the time. I remember that “The Prisoner of Second Avenue” and “The Terminal Man” grossed $8,500.00 in one week and was held over. The theatre had many partners under the Golden regime. Lastly, the theatres' best attraction was it’s marquee with it’s flashing yellow 10 watt bulbs blinking the name “BEVERLY” on all three sides. The flashing yellow lights had a number of speeds as slow, medium and a fast one. The staff who made up the staff were very nice to me. All in all, it was a some what fair experience though not one of my favorite theatre jobs.

Boo, very cool that your dad owned N.E. Tell’s Bakery. You could join the Facebook group Old School Cortelyou. There are people who went to PS 179 and PS 139 etc. we have talked about missing your bakery in different threads.

According to “The Encyclopedia of the American Theatre Organ” by David L. Junchen, pg. 630, the “Beverly Th.” in Brooklyn, New York, had a Seeburg-Smith pipe organ installed in 1919.

The number of manuals and ranks of this organ is not listed in the book, being unknown at the time of publication.

Except in the extremely rare occasion when a brand-new blower would fail and need to be replaced (again, not common), most entries for multiple organ blowers going to the same theatre (listed in the book) represent enlargements of the organ, or occasionally a new replacement organ from the same manufacturer. The fact that all three blowers went to the same theatre in the same year means that PROBABLY either:

(The Kinetic blower serial number letter prefixes roughly correspond to the year made, with the subsequent two-, three- or four-digit number representing the sequential number of the blower within that year, with the numbering starting all over for every new year/lettered batch).

Regardless of all of this ridiculous speculation on my part, the organ was indeed built, and if all three blowers were indeed used at the same time, this may have been one of the largest Smith organs ever built, with a total of 6 horsepower making it over 10 ranks, and maybe over 15.

Does anybody have any photos or info on this organ, or know where it (or its parts) is/are today? Thanks!

Boo, now that is neat. I so clearly remember Dubins bakery on Church and can picture Tell’s. My uncle, Israel Liss, was a freelance Jewish cake baker – working many of the places. I wonder if he worked for your dad ? Jonathan

Wow, with Ebinger’s next door, I wonder if anyone was able to successfully smuggle in their famous Blackout Cake into the Beverly Theatre, to nosh on during the feature.

Boo: Great to see your Comment. I am looking for my father’s family. His name was Edward Thomas Tell (b. 1912). Long story but I’d love to chat if you are related to him. I. believe he was related to the bakery and worked there in the 1940’s. ed

Fantastic to read all this. I spent every Saturday of my childhood at this theater, beginning probably mid 1950’s through my elementary school (PS230) years. I lived a block away, it cost 26 cents for a double feature (actually I think it was 15 cents when I first started to go). My mother would give me another 10 cents for candy. I saw every movie I could, from Frankenstein when I was probably 7 or 8, to Lady and the Tramp, to later, more grown-up films. I remember discovering that there was an art house theater on Flatbush Ave. that had totally different movies: Peter Sellers in I’m All Right, Jack. I ended up going to Erasmus, so the Beverly experience remains in the early-childhood memory bank, while the coming-of-age period probably includes the Loews King and that theater on Coney Island Ave where I saw Breakfast at Tiffany’s. Anyway, I remember walking home from the Beverly one Saturday afternoon when it was unexpectly already dark! And there were empty lots along McDonald Ave. I had seen coming attractions for The Mole People, and kept wondering if there were tunnels under that earth in the empty space on McDonald Ave, and if the Mole People would come up and get us. My friend and I laughed and ran all the way home, pretend-scared but scared enough. That same Matron with the white hair and the flashlight was there in the 50’s, though the writers mention her from the 70’s. About 15 years ago I wrote a play, a 10 minute thing, called “Red Hot Romance” about magical Red Hots (candy) that the movie theater audience snacks on…and all hell breaks loose. Anyway, theBeverly Theater has inspired me in my life, no question about it.