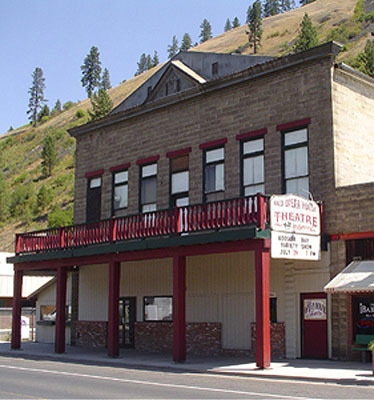 The Kooskia Opera house was built in 1912 on the second story of a hardware store building. It was used for silent movies, vaudeville acts and community events. It was still open in 1948 when the Spokane Daily Chronicle noted that the theater had installed air conditioning.

In 1994 Mike and Marcia Graves restored the closed opera house, which is only fitting since Mike’s great-grandfather helped build the building and then bought it in 1917. The Graves then produced musicals such as “Oklahoma”, which became quite popular in the community. Since then it has been used for a variety of activities.

In 2012 Brandon Graves, a fifth generation family member, bought the building to carry on the tradition of providing a meeting and entertainment place for the community. The building means more than a historic opera house to Brandon because in 1999 he married his wife Shoni on the stage.

It’s interesting to see how the opera house has changed with the times and has been brought into the modern entertainment age. The Lewiston Tribune noted in March 2012 that on April 13-14 the opera house would hold tryouts for the first Northwestern Idol contest. The winner was to be awarded airfare to one of the tryout locations for “American Idol” or “X-Factor.”