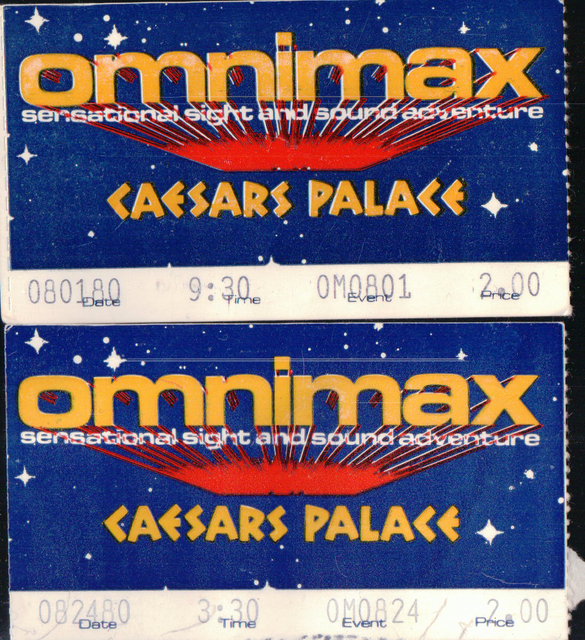 Located in the Caesars Palace Hotel & Casino complex. The OmniMax Theatre was opened in December 1979. It was closed in May 2000. The space is now Caesars Palace Colosseum, a live music venue.

I’m trying to recall now, if this is the theatre where one could exit past a window that looked onto the projection equipment, giving patrons an appreciative glimpse into how massive the platter of IMAX film actually was. I may be thinking of the Lincoln Square IMAX in Manhattan (where you are made to exit the auditorium by climbing up the stairs to the back of the house). Whichever theater, I seem to recall seeing how the platter was mechanically lifted off the spindle to be rewound or replaced with a different film. The memory is a bit hazy.

One funny little bit of personal coincidence… the Street View above shows that Cher was the star performer appearing at the casino at the time of the image. I believe Cher was also the headliner at the Circus Maximus when I went to the OmniMax back in August, 1980 (with comedian Freddy Roman opening, if memory serves). I need to find my photos of that trip to be certain of that.

There were a few IMAX feature films that ran over the years at the OmniMax at Caesar’s. The only one I saw was Wings of Courage. I think. I don’t remember exactly.

I remember being in this theatre in the early 1980’s very nice and excellent presentation. Sad to hear that it is closed.

Hey Ed, Just wanted to confirm that you are correct. When you would exit the Omnimax you would be able to see the projection area where the print would rewind. It was cool to watch that big 15/70 print start rewinding.

I programmed the lighting controller for outside of the Casesar’s Palace Omnimax theater when I was in college. I wrote the assembler language back in 1979! I was so sad to hear that the theater was torn down, as I never was able to personally visit the working project! I am interested if anyone can share online any pictures or videos of this project so I can add it to my portfolio! My website is www.newtechniques.com and email is

I believe the project was opened during a celebration for Frank Sinatra’s birthday? I would love to see any photos of the outside from that event.

The OmniMax in Boston at the museum of Science has been there for years and is still going strong. It plays nothing but Imax educational films. Has never played a commercial film tyo my knowledge where the Imax at the aquarium did play commercial films at one time but no longer.

When the Omnimax Theater at Caesars Palace opened in 1979 it was a transport into sight and sound. Located on the north side of the property it almost looked like a huge golf ball. The Omnimax featured laid back seating with surround sound and an overhead screen encompassing the entire range of vision. Plagued from the beginning with leaks in the screen it still lasted nearly 21 years closing in 2000. Pictured in 1980 from the Caesars Palace Collection and shared via UNLV Libraries Digital Collections.