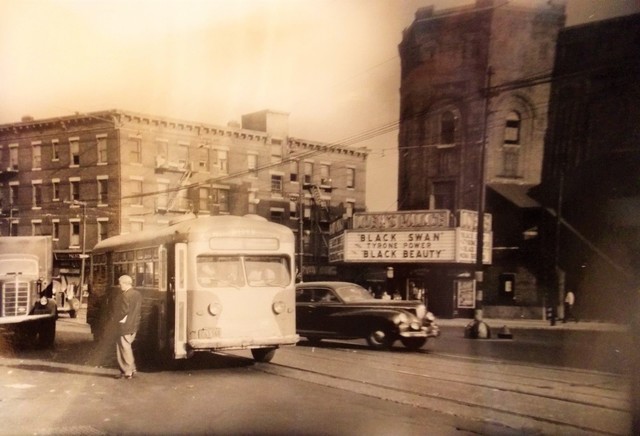 Originally planned to be named the Portia Theatre by the Sterling Amusement Company, it was built in 1914, opening on August 16, 1915 as the Palace Theatre. It was located in the Brownsville section of Brooklyn on the southwest corner of Douglas Street and E. New York Avenue, around the corner from the now-closed Loew’s Pitkin Theatre. The Palace Theatre was equipped with a Moller 3 manual 16 rank theatre pipe organ.

It was leased to Loew’s Inc. almost immediately on opening in August 1915 and renamed Loew’s Palace Theatre. In December 1918, alterations to the interior were carried out by architect Thomas Lamb. Loew’s Inc. operated the Palace Theatre until 1955.

Story has it, that it didn’t have air conditioning which forced its early retirement from the movies. In May 1955 it was taken over by an independent operator Jacob Jacobs to be used as a Yiddish theatre from the fall of 1955. But this was a short lived venture and it returned to movies, operated by the Island Theatre Circuit, closing in 1969/1970. Demolished in the 1980’s after the roof caved in.

The 1967 FDY lists the Palace as part of the Island Theater Circuit, as Orlando pointed out back in 2004, along with the Majestic, Banco, Starr, Kent and Graham, all in Brooklyn. All these theaters are listed on CT with the exception of the Banco, which doesn’t turn up as an aka either. Anyone heard of that theater?

Even in the early 1960s when Brownsville was still decent and my father would take me to the Pitkin, Premier and Stadium, he always told me that the Palace was a dump. I remember being fascinated that it used to show 3 pictures. Apparently it was or became a kind of grindhouse that was open 24 hours.
Several years later I met a guy in high school who went to the Palace once. He advised that the place was loaded with winos and described to me some of the things they were doing during the picture. I won’t go into them here. Ugh.

I always attended the Palace in the 50s. I also went to the Peoples Cinema on Saratoga and the Rio on Stone Ave. They were all the same. Three pictures a short such as Joe Behind the Eight ball or Three Stoges. Ten cartoons, a serial coming attractions and always a western.

Now you tell me were could a kid have more fun then to spend a Saturday afternoon enjoying all of that?

The closed and very run own Palace Theatre is clearly visible in the TV movie The Marcus Nelson Murders (http://www.imdb.com/title/tt0070372/) at around 16 minutes in. It looks like the whole block has been demolished since 1973 though. Also, the Google street view is not the address given on this page. The view is the actual location of where the building was located – the corner of Strauss and E. New York Ave at St. John’s Place.

The entire block hasn’t been razed, as the apartment building on the corner of Saratoga at the far right of the street view was there back then.

As with Saluki16, I grew up across the street from that poolroom & the candy store of which he speaks was run by The Clayton’s & we used to call the lady Ms. Estelle, which means that he lived in the building right next to mine, though I moved there in 1969.

This would be around the corner from The Capitol Theatre, but I remember when it was a store with the name “Miller Capitol Theatre” engraved into the brickface. I sure wish that I had thought to take a picture of it back then, but I was a kid, it was a general store, later convertedto the Afro Carting Company & I had no idea of the significance of it back then.

lostmemory – The Banco was on Fulton St. near Nostrand Ave.

I have a photo taken in the late 1990’s or early 2000’s of Miller’s Capital Theatre engraved on the dirty concrete name plate on the facade. I can’t tell you if it was Capitol or Capital but I think it was the former. Has anyone found an ad or true opening date. I know I listed 1918 in a post 14 years ago but now would like to see an ad. It’s opening eluded me in my search, it just popped up in 1918 without opening fanfare.

The opening date an ad on Loew’s Palace in the above post which I omitted, Oops! TheCapital entrance was cinder-blocked in and derelict.