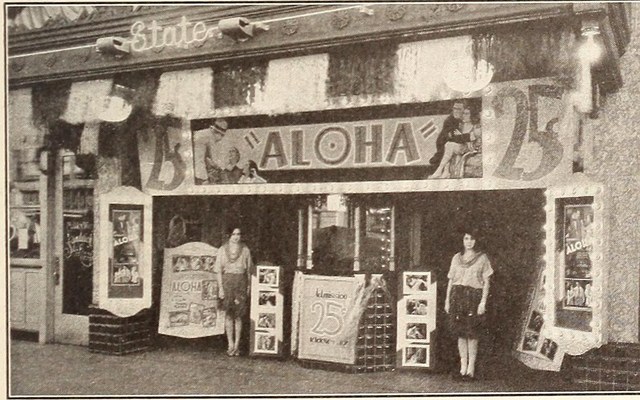 The 735-seat State Theatre, designed by architects Hunsicker and Smith, opened on July 4, 1929. The developers, A. George Roy and Walter H. Leverette, were no strangers to the theatre business. It was noted that Leverette had built the Holly Theatre and State Theatre in Medford and Roy had operated theatres in Grants Pass, La Grande and Corvallis.

The Eugene Register-Guard, with its complete coverage, including photos, described it as being in “the Spanish Style.” The first movie was billed as an All-talking Program, “My Lady’s Past” with Joe E. Brown. It was a Fourth of July celebration for the citizens as attendance to the grand opening reached 2,000 that day.

According to Register-Guard stories, it was remodeled in 1932 and on its 10th anniversary in 1939. Along the way it apparently lost some capacity as the Film Daily Yearbook of 1943-45 lists it with 400 seats. A June 22, 1946 article in Boxoffice noted the retirement of George Roy, the original owner, who sold his interest to West Johnson.

On September 4, 1948, after a two-week remodeling and a name change it reopened as the Lane Theatre. The advertisement in the Register-Guard touted: “Anti Inflation Prices! Adults 35c * Children 9c.” Around this time it joined Western Amusements of Los Angeles, which also ran the Helig Theatre, Mayflower Theatre, Varsity Theatre, McKenzie Theatre and the Eugene Drive-In. Jack Baldock was the city manger and he made the news quite often because of his civic endeavours.

On November 6, 1955 the listing on the theatre page listed it as closed. This was probably due to the remodeling of the former Rex Theatre, which became the very modern Fox Theatre when it reopened on August 25. Other than the Lane Theatre being used for public meetings, there was no information on the theatre for about 15 years.

During the early 1970s a much-debated urban renewal program drastically changed the whole downtown. The Register-Guard noted that the adjacent Sak’s Furniture at 68 West 8th Avenue was acquired by the Eugene Renewal Agency for demolition in 1970. It is assumed that the Lane Theatre was also demolished during 1970. Today the location is a parking lot next to US Bank.