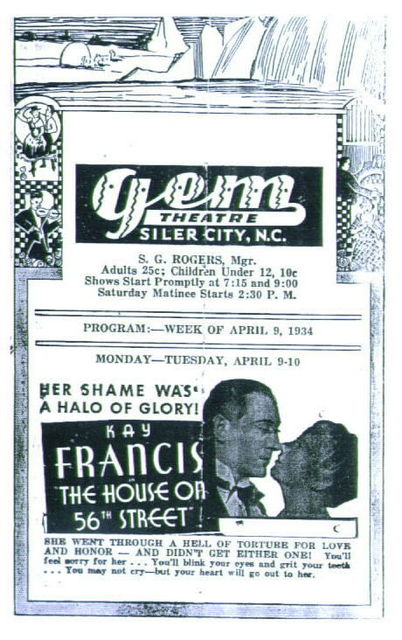 The Gem Theatre was opened in December 1913. The facade was remodeled in 1923. It was closed by 1939 and was converted into a store.

DocSouth says that the Gem Theatre was in operation by 1926, when it had 200 seats.

BoxRec says that a bout between boxers Lew Carpenter and Tommy Swinson was held at the Gem Theatre in Siler City on February 19, 1927.

It’s possible that the Gem Theatre was in operation as early as 1914. A transcription of the 1914 edition of The North Carolina Year Book and Business Directory here lists a Gem Theatre, but somewhat ambiguously. It follows the listings for Siler City, but the section it is in is headed Chatham-Cherokee. Chatham is the name of the county of which Siler City is the seat, and Cherokee is the adjacent county. Another business listed in the same section has Siler City in its name, so the Gem was probably in Siler City as well. An actual scan of the book might clear up the mystery. But even if the 1914 Gem was in Siler City, it might not have been in the same building that housed the theater in 1926.

Siler City isn’t a county seat. Pittsboro is. Cherokee County is not adjacent, it’s at least 50 miles to the west. I’m sure the counties were listed alphabetically. I assume the transcription is bad, and the header of the page is the two counties listed on that page.

Address for the Gem is 121 N Chatham. It was located in the John F. Lambe Building. According to the NRHP listing for downtown, the Gem opened December 1913. Façade was remodeled in 1923. The Gem must have been closed by 1939, when a neighboring store expanded to include the building.