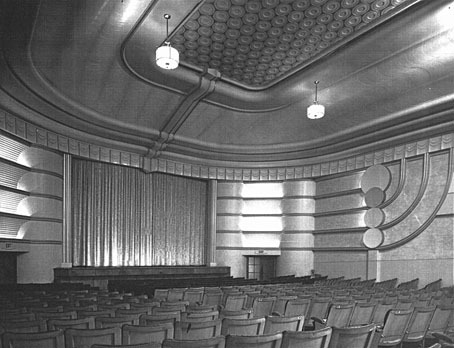 The National Theatre in the suburb of Richmond dates from c.1921 and was operated by Tom O'Brian. It underwent major refurbishment in the Streamline Moderne style in 1935 to the plans of architectural firm Cowper, Murphy & Appleford. It remained in operation until the late-1950’s or early-1960’s when it was purchased by Cosmopolitan Motion Pictures group to add to their expanding Greek cinema circuit. The National Theatre became one of their most successful theatres, screening Greek movies and the occasional Turkish and other language movies. It continued until 1985, when it was closed and converted to a live music venue known as The Old Greek Theatre. It suffered an inglorious end with a major fire.

Sometime around the early-1990’s it was bought by Ralph Taranto with substantial plans to convert the venue back into a twin movie theatre under the guidance of Sydney movie theatre restoration expert John Love (of Orpheum Theatre fame). The project commenced but stalled and was sold again. This time it became a Sportsgirl clothing store, never to see movies again. Basic building is still standing in 2012.