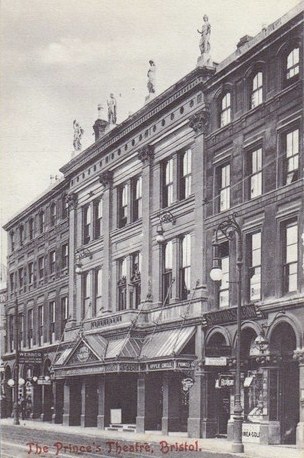 The Theatre Royal was opened on 14th October 1867 with “The Tempest” by William Shakespeare. It was considered an ‘up-market’ theatre. It was designed by noted theatre architect C.J. Phipps of Bath. Seating was provided in orchestra stalls, pit stalls, dress circle balcony and gallery levels.

Tragedy struck on 27th December 1869, when a crowd of over 2,000 rushed the doors of the theatre trying to gain access into the unreserved seating in the pit stalls and gallery levels, plus eight private boxes.. As some stumbled and fell they were crushed and trampled upon, when someone then yelled ‘fire’, causing the crowd to panic and they turn to run out of the building. The death toll was 18, mostly teenagers.

The Theatre Royal was re-named Prince’s Theatre from 4th August 1884. In June 1889, the theatre was closed for five weeks, for redecoration by the Plaster Decorating Company of the Strand, London, and for alterations to the gallery to the plans of noted theatre architect Frank Matcham. Further alterations were carried out in 1902, again to plans by Frank Matcham.

There is an extensive theatrical history of the Prince’s Theatre in Bristol with pictures and programmes at this website.

In Wolverhampton in the UK. There is a very fine example of C J Phipps work “The Grand Theatre” Most of the original design is intact..

also posted the article about the 1869 deadly incident.