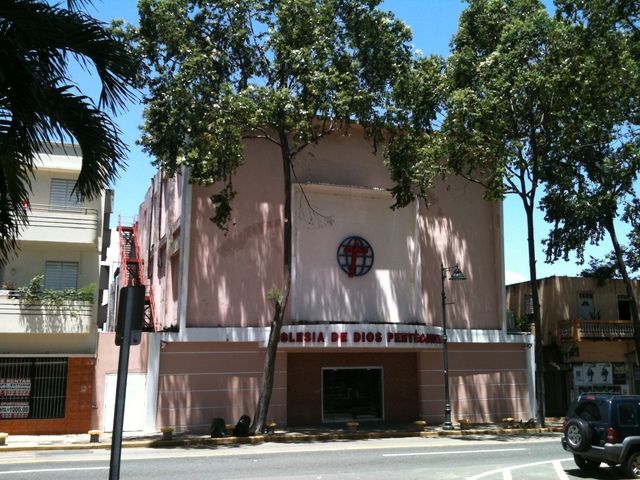 This movie theater was part of the Cobian chain, which was bought by Wometco.

During the 1960’s it featured first run films, although not the huge blockbusters. The Cine Metropolitan was the kind of theatre that showed a wide diversity of movies, from Woody Allen movies to Bruce Lee flicks to British horror movies. It was also the place where all the "Planet of the Apes" movies were shown in the early-1970’s.

In the late-1970’s it became an independent theatre and the quality of movies dropped a bit. Still it was always a nice, comfortable first run movie house. It closed down in the early-1980’s. The last movie shown was the 1981 Charles Bronson film, "Death Hunt". The title of the movie remained posted in the marquee long after the theater was closed.

In the mid-1980’s it was transformed into a disco called "Levels". The place was very trendy for a couple of years but it eventually closed too.

In the early-1990’s it became an evangelical church. Currently one can see advertising for the church on tv, and it is always weirdly nostalgic to recognize the interior of the wonderful Cine Metropolitan.

JSA: I felt emotional and nostalgic by reading your comments on the article. Brought back many memories. Yes, all dressed up, no T shirts or ragged jeans. Those were the days!

Correction on my comment above: Should have said return engagement instead of reissue. We brought the film back at the Metropolitan after the film or films that followed it ended its run. Charmian Carr made an appearance on the first night of the return engagement.

Bob: I did the ads for SOM in PR and did not do any ad asking who Charmian Carr was. By the time she made her appearance at the theater the film had already played for many many weeks and everyone knew who she was. That night the theater was packed and everyone wanted to touch Charmian and get her autograph.

AGR: “It’s a small world!” Good grief, give me a break, it’s only been 44 years (the winter of 1966 is my guess)! I guess I messed up a little on the Charmain Carr story. At least I remember something about Liesl being in Puerto Rico, you should be proud, it just goes to show your advertising skills are immortal!!!!!!

Seeing again the latest DVD of Around The World in 80 Days, made me wonder if the premiere in PR was in Cinestage. The Metropolitan used to be the Capitol, I don’t remember if it was a first or second run house. The theatre was closed to prepare for the opening of Around the World but nothing was said about Todd-AO. The new screen was like the one installed at the Music Hall for The Robe but with a deeper curve and the stereo sound was terrific. I had seen Cinerama and Todd-AO in the US. Todd-AO was very impressive with the deep curved screen, it looked like Cinerama to me. I thought that in PR World was in scope because Oklahoma was shown in its CinemaScope version at the Music Hall. At the time I had no idea about Cinestage, I learned about it when I bought a computer and started visiting film sites. That is why when I joined the exhibition business in PR I never inquired if World was in scope or what. Todd-AO was installed at the Metropolitan for South Pacific and they installed the screen that lasted until it closed, taller but only slightly curved. Eventually the Music Hall curved screen was replaced with a flat screen as was the one at the Lorraine which was curved from wall to wall, very impressive. I guess that happened when Fox did not require the silver screen anymore and the CinemaScope ratio was adjusted to fix the sides distortion, which I never noticed. AGR

Intro is wrong about seating capacity. It had over 900 seats, about 920. Also, after Around the World it only played spectaculars and after 70mm was installed it played Ben Hur, Mutiny on the Bounty, Zulu and all the big blockbusters.

AG….since you know so much about this theater, can you comment on its orignanal style and current condition?

LuisV, the reason I “know so much about this theater” is because I managed it for a few months while I was being trained as the assistant to Rafael Cobian Jr. at the home office in the mornings. I don’t remember what the interior looked like as the Capitol. As the Metropolitan it was a simple modern design, wood paneling in the walls to about 5 or 6 feet above the floor and the walls were covered with grey aucustic tiles with the stereo speakers on both sides and the back. The curtain rose up as in the Puerto Rico, it was not the tipe of curtain that parted to the sides as in the Paramount, Metro and most theaters. The downstairs and upstairs lobbies were also simple, neat and clean decor. As the church it is today, I have no idea what it looks like. I have never been inside.

It is with great sadness that I inform you the passing the Andres Roura, a great contributor to these pages about movie theaters in Puerto Rico. I had the privilege of meeting Andres thanks to this site and our long lunch conversations about movies and movie theaters are things I will always treasure. And I will miss his weekly e-mails telling me about movies on TCM. Que en paz descanses.

What’s going on with the 3 or 4 theaters on Eduardo Conde, Villa Palmeras… and Borinquen in Ave. Borinquen in Barrio Obrero??? I have the pictures ready!!! ;–)

I just saw with sadness about Andy Roura. I worked with him when he was with Wometco and I with 20 Century-fox in the 1960’s. He was a gentleman and the most knowledge about movies and Puerto Rican Theatres. He will be greatly missed