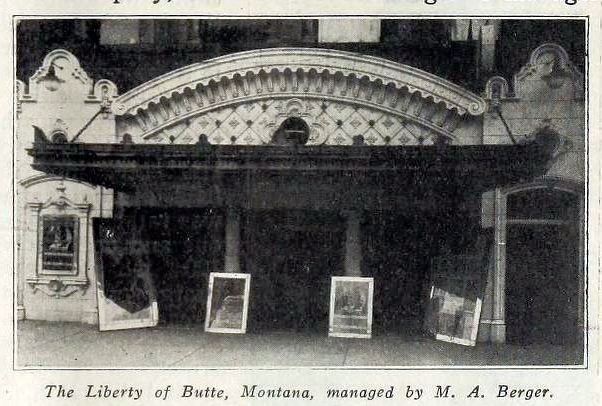 The Liberty Theatre opened May 20, 1916 and at the time was one of the newest theatres in Butte built for motion pictures, it was also considered one of the best equipped smaller houses in Montana. It was located on W. Broadway Street, with seatng listed at 750 and operated by Liberty Amusement Co. Prices were given at 10 and 15 cents for evenings and 5 and 10 cents for matinees. It had closed by 1934.

According to this web page, the Liberty Theatre was installed in the Mantle Block, an office and retail building at 14-20 W. Main Street built in 1892. The Mantle Block was designed by architect H. M. Patterson, who later moved to Los Angeles and designed the First Presbyterian Church of Hollywood.

The Mantle Block is still standing, occupied by part of the Piccadilly Museum of Transportation Memorabilia and Advertising Art. It’s an interesting Romanesque Revival building with a few Gothic touches. As the theater opened in 1916, more than a decade after Patterson moved to Los Angeles, it’s unlikely that he had anything to do with the alterations for the theater. The entire building is still standing, even though the theater was dismantled long ago.

Exactly when the house was dismantled I don’t know, but it was presenting movies and vaudeville at least as late as 1933, and in 1935 it was hosting weekly wrestling matches, according to various items in the Butte Standard.

The Liberty Theatre is listed as closed in 1934.

ad in the photo section.