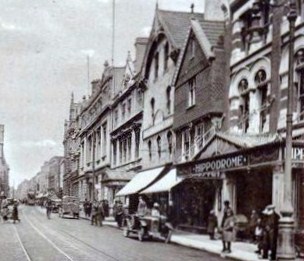 Originally opened as the City Cinema on 20th June 1911. It was altered in late-1914 with the addition of a stage and dressing room facilities, re-opening as the Hippodrome Cinema on 1st March 1915, presenting variety on the stage and films on the screen. It was taken over by Poole’s circuit, who continued cine-variety programming.

In 1930, it was equipped with a Western Electric sound system. In 1935 it was closed for reconstruction to the plans of architect Chadwick, Watson & Company. The building now had a modern Portland stone facade, and reopened on 16th September 1935 with Jack Hulbert in “Bulldog Jack”.

The Hippodrome Cinema was equipped with CinemaScope in July 1954, and “The Command” was the first film to be screened here in this process. Disaster struck on the evening of 23rd October 1955 when an audience were attending a ‘Sunday For One Day Only’ performance of “Sudden Fear” and “Night Riders of Montana”. A fire broke out in the roof of the building and it quickly spread, gutting the building. The audience exited the building safely.

The Hippodrome Theatre was rebuilt and re-opened on 18th June 1956 with Shirley Jones in “Carousel”, presented in CinemaScope 55. The Rank Organisation took the cinema over from Pooles circuit on 1st October 1956 and it was re-named Gaumont from April 1959. The Gaumont was closed with only a weeks notice on 22nd April 1961 with “Murder Incorporated” and “Desire in the Dust”. The building remained empty for the next three & a half years, and was demolished in September 1964. A British Home Stores was built on the site.