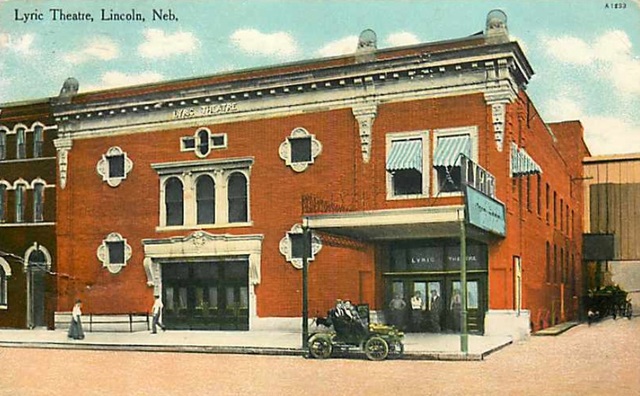 Known from a postcard photo showing a handsome, early, cinema. The incandescent light marquee says: LYRIC This Week “The Power of Truth”. An intrepid researcher could identify the date through old newspaper advertisements. The Lyric Theatre was closed in 1927 and was demolished to make way for the Stuart Theatre on the site.

A Lyric Theatre at Lincoln was on a list of vaudeville houses published in the April 7, 1906, issue of theatrical trade journal The New York Clipper. However, an entry in a timeline of events of 1906 published in Nebraska Blue Book, 1915, said: “Aug. 27—Lincoln opened new Lyric theatre.” Perhaps the item in the Clipper referred to a previous Lyric Theatre.

The Lyric Theatre was in operation as a movie house at least as late as 1924. The operators of the house, Hostettler Bros., published weekly program guides to their theaters, and scans of a few are available from the Nebraska Memory web site. Here is a PDF file of the current and coming attractions published May 19, 1924.