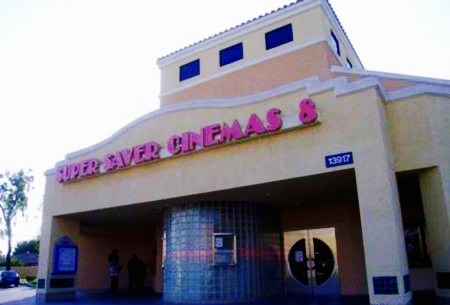 This discount theater, which originally opened as Super Saver Cinemas 8, was taken over by Regency Theatres in February of 2012 and now is called the Norwalk 8.

Its history goes back to 1990 when the Long Beach Press-Telegram announced a December opening of the Norwalk Super Saver. Norwalk Town Square management built the $1.3 million building and Super Saver spent $2 million more on the interior. The first California Super Saver had already opened in Seal Beach in August of 1989.

Over the next 22 years the Norwalk location went by the names Super Saver Cinemas 8, Phoenix Theatres, Phoenix Adlabs, Silver Super Saver Theatres, Big Cinemas 8 and probably more. In 2009 the Los Angeles Times described, its then owners, Big Cinemas as India’s largest movie theater chain with 181 locations in the U.S.

In the interest of economy it appears that none of the operators ever changed the signage and Super Savers Cinemas 8 always remained on the building.

Regency Theaters counted the Norwalk location as its 29th theater in a still growing chain.

Super Savers Cinemas were suppose to locate where i live, but somehow ,like over night it became a REGAL Cinemas first run house.

Regency Theatres Circuit closed the Norwalk 8 on March 17, 2020 for the COVID-19 pandemic. The theatre bucked the trend of discount houses that closed permanently during COVID-19 by returning on July 9, 2021 resuming its policy of playing sub-run discount films.