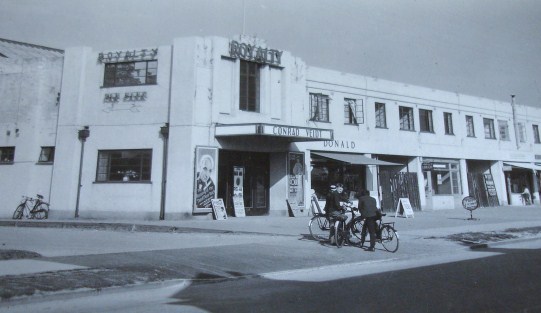 Located in the small Buckinghamshire Thameside town of Bourne End, at the corner of The Parade and Wakeham Road. Bourne End was the last town in Buckinghamshire to have a purpose-built cinema. The Royalty Cinema was opened on 1st January 1934 with Margot Graham in “I Adore You” and Bette Davis in “Ex Lady”. The auditorium ran parallel to The Parade, and was hidden behind a parade of six shop units. Seating was all on a single raked level. There was a small stage. The cinema had a cafe, and boasted a car park at the rear.

Always independently operated, the Royalty Cinema was closed on 14th December 1957 with Yul Brynner in “The King and I”. But after some redecoration, it re-opened on 6th January 1958. It was finally closed on 30th May 1959 with Bob Hope in “Alias Jesse James”.

It was converted into a furniture store, while a small cafe was operated from the former stage. The car park was sold off, and shops were built on the land,