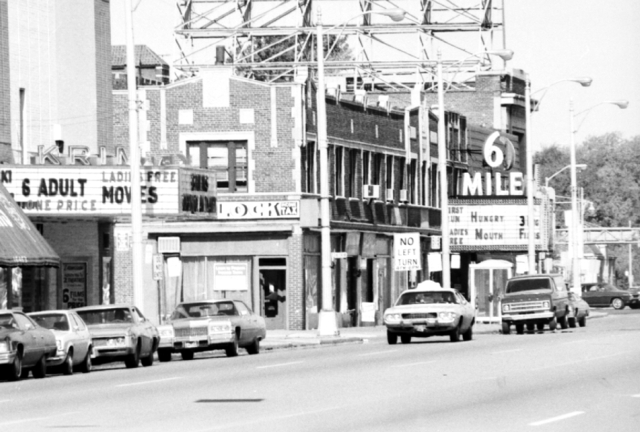 The Krim Theater, designed by Charles N. Agree in his usual Streamline Moderne style, opened April 26, 1941 with Errol Flynn in “The Sea Hawk” & Janet Gayner in “A Star is Born”. It could seat over 760.

During most of the 1950’s, the Krim Theater screened art and foreign fare, and featured a nearly year-long run of “Julius Caesar” with Marlon Brando, which outgrossed most of the downtown movie palaces.

Later renamed the Trans-Lux Krim, the theater turned to pornographic films in the 1970’s and 1980’s, before being purchased by the Revival Tabernacle Assembly of God church in 1990.

I can’t remember ever going to see a movie there when I was young, as far as I can remember, it always showed adult movies. Although it had a marquee, it never really stood out until they started advertising adult movies.

Pictures of Trans-Lux Krim
It appears the theater may be somewhat intact.

In the middle 40s, immediately following WWII, the KRIM, was an economy house. I remember paying .09 cents to see three movies and
a cartoon an newsreel. The movies were from the 30s and relatively
recent B movies. Two I remember was Paul Muni in Scarface and also
James Cagney in White Heat. This format lasted until the KRIM became an ART theater featuring foreign films, The KRIM was right down the street from the RKO UPTOWN, a more upscale theater, and was seemingly seeking a way to stay open.

I remember the Krim as the primier art house in Detroit in the 50s. The other 2 were Surf & Coronet. Later the Studio became the most important. AND GOD CREATED WOMAN may have been their biggest moneymaker. They showed all the Bardot movies. I think LA DOLCE VITA & BREATHLESS played here. I do remember I AM A CAMERA, THE NIGHT OF THE IGUANA, LES LIAISONS DANGEREUSES & Tyrone Guthrie’s film of his Stratford Ontario production of OEDIPUS REX. They put in a new stereo sound system for the re-release of FANTASIA. Also THE GIRL WITH THE GOLDEN EYES & VICTIM. Now & then they showed revivals. I remember THE BEAST WITH FIVE FINGERS & THE MASK OF DIMITRIOS.

Does anyone remember who purchased this theatre in the 70’s and turned it into the adult movie venue?

I had the Krim Theatre & Wood six …

I was 13 years old in 1958 and desperate to see Brigitte Bardot in “And God Created Woman” during its long run at the Krim. When a highly edited version opened at the neighborhood Linwood Theater that year my 14 year old cousin “Pookie” and I hid under the seats after the Saturday matinee so we could sneek and peek at what all the fuss was about.

Fortunately I was old enough to get into the picture show a few doors down from the Krim. Was that the 6 Mile? It seems they were both just south of the 6 Mile Road on Woodward. After the movie I enjoyed a deli nearby that served a mean hot pastrami on rye with cheddar and hot mustard washed down with a giant fountain coke.

I was devastated by the destruction of downtown Detroit and the Highland Park commercial district as I cruised along Woodward Avenue in 1997 and 2013. In the late 50’s I used to take the McNichols (6 Mile Road) bus over to Woodward then ride the streetcar or bus downtown and have a hot fudge sundae at Sanders when Detroit was still vibrant, bustling and full of trees and jobs.

Sometimes I rode the bumpy rattling Russell Street bus downtown to explore Hudson and see my Aunt who worked in the shoe department. Aunt Martha was the only black sales person at Hudson I ever saw. According to folklore she had passed the paper bag test because her skin was light and damn near white. It is so sad to see the former industrial capital of the world city now largely deteriorated and abandoned, but most of all I miss the grand old Michigan Central Station and Sanders hot fudge sundae.