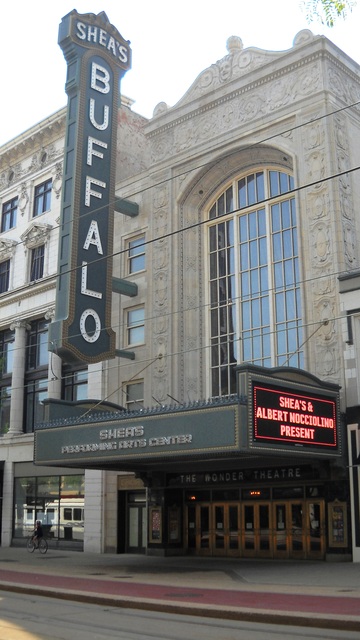 The 4,000-seat Shea’s Buffalo Theatre opened on January 16, 1926 with Adolph Menjou in “The Melting Pot. The proscenium is 66ft wide and the stage 32ft deep. In the 1930’s the seating capacity was reduced to 3,489-seats. It is equipped with a Wurlitzer 4 manual 28 ranks organ which was opened by organist Lloyd G. Castillo. From 1948 it was operated by Loew’s Inc. They closed the Buffalo Theatre as a movie theatre on June 30, 1975.

Shea’s Performing Arts Center is run by a non-profit organization dedicated to bringing a combination of musicals, Broadway productions, operas and concerts to downtown Buffalo. It is a historic and cultural landmark and features an annual series of free classic movies as well as free concert series directed towards young audiences.

The theatre was added to the National Register of Historic Places in 1975.

In 2009, all five original designs of carpet were replicated, replacing ordinary carpet installed thirty five years ago. The original patterns were all variations of a burgundy, dark blue and gold combination.

I enjoyed seeing the classic film The Sound of Music on the big screen at Shea’s. It was quite an experience and it was nice to see so many families in attendance.

Some have asked about the history of the theatre in the 1970’s and about Loews. Here are some comments from one of the folks who saved the theatre back then….me… The theatre was managed by Loew’s and owend by Leon Lawrence Sidell. Sidell failed to pay his taxes and the city called in the default and took the theatre. Loews continued to operate the theatre for a period of time and then decided to leave. Prior to that, they were planning to strip the theatre of its fixtures, furniture, organ, etc., and they had done to other theatres. The Friends of the Buffalo, led by Curt Mangel, got a court order to stop them, and, in a landmark decision, the court ruled that Loews had no right to strip the theatre and Loews left without their booty. To this day, many of the fixtures/furniture have a serial number that was put on them to inventory them, that was done in the middle of several nights without Loews knowledge, to prevent them from stripping the building. Without the 15 original Friends, this never would have been possible.

This link looks as Sheas success as a performing arts center.

The link above deals with Shea’s screening of the classic horror film, “Phantom of the Opera”, with accompaniment by the Buffalo Philharmonic Orchestra.

The article above deals with restoration at Sheas.

This link deals with restoration being done at Sheas.

1959 photo added courtesy of the AmeriCar The Beautiful Facebook page.

Screening Harry Potter and the Sorcerer’s Stone on the big screen with the Buffalo Philarmonic performing the score from the film on Feb.21-22.

I don’t seen any links in previous comments to this video about the restoration of Shea’s Buffalo, posted at YouTube in 2014. It’s worth a look, with lots of interesting details. I had no idea, for example, that the interior decoration was done by Tiffany Studios.