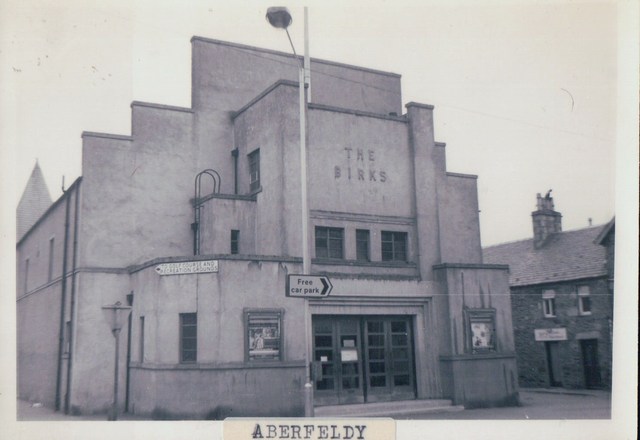 Located in Aberfeldy, Perth & Kinross, at the corner of Dunkeld Street and Chapel Street. The 436-seat Birks Cinema was opened on 3rd July 1939 with Walt Disney’s “Snow White and the Seven Dwarfs”. The proscenium was 26 feet wide (later widened to 27 feet when CinemaScope was fitted in the 1950’s). It was closed in the early-1980’s after operating as a cinema and part time bingo club for several years.

It was converted into a Family Amusements arcade and snooker club which closed in 2004. The building was put up ‘For Sale’ with possibilities for redevelopment. It was purchased by the Friends of the Birks Cinema in 2009, with plans by architect Robin Baker to restore and renovate the building as a community cinema & cafe.

The Birks Cinema was re-opened on 19th April 2013. Now with a reduced seating capacity for 100, it is equipped with state-of-the-art digital projection including 3D. There is a 64-seat cafe.

Back on its feet again, that makes a nice change to read on here.

Fantastic… Presumably helped immensely by the advent of digital projection?

I visited this transformed cinema on Friday 23rd June 2017, when I saw “Gifted”, starring Chris Evans and Lindsay Duncan. I was delighted to see how it has been imaginatively converted into a true community asset.

The former auditorium has been divided in half, with almost equal space now devoted to the new auditorium and the café/function space. A mezzanine floor has been inserted above the foyer/bar/café, creating a multi-purpose function area upstairs. Meanwhile, the new auditorium, sideways on from the original, has comfortable, raked seating with four two-seat sofas along the back row. Full-height glazing has been punched into the side wall of the café area, allowing plenty of light in.

For trivia buffs, I gather that “birks” is the Scottish name for birch trees. Robert Burns wrote a poem ‘The Birks of Aberfeldy’, which presumably inspired the cinema’s rather unusual name.